Stephen Thompson scored the only goal of the game on his 250 th league start to give Quakers the points and their third away league win of the season.

Thommo scored just after the half hour mark, but it was also a triumphant return to the team for Liam Hughes, who had an excellent game in the heart of defence after a month out, especially when Blyth had more of the game in the second half.

It was a windy day, with the wind blowing diagonally across the pitch, and it was clear that there wasn't going to be much in the way of flowing football.

Quakers got a free kick on the left in the first minute, Romal Palmer curled the ball towards the area, and the ball was blown by the wind into Peter Jameson’s hands.
Sam Muggleton’s long throw from the left caused panic in the Blyth box after 2 minutes, and the ball dropped for Simon Ainge to have a shot deflected over by Jameson.
Quakers then had to defend when Michael Liddle curled a free kick from the left into the box, and keeper Jonny Maddison managed to scramble the ball away.
Maddison then got down low to his right to hold on to a low shot by Adam Wrightson.

Quakers had a penalty shout turned down when Thompson tried to play the ball into the box and the ball seemed to hit a defender on the hand, but the ref waved play on.
Maddison pulled off a good save on 14 minutes when Danny Maguire found space just inside the corner of the 18 yard box and hit a low shot that the keeper blocked at his near post.

Quakers nearly took the lead on 19 minutes when Jordan Nicholson cut into the box from the right and struck a low left foot shot that former Darlington keeper Peter Jameson pushed around the right hand post.

Quakers had another chance on 25 minutes. Luke Trotman was fouled way out on the right, Galbraith whipped the free kick on the wind into the middle, and Thompson glanced the ball just wide.

Quakers had a great chance to take the lead when Palmer found Trotman on the right again, and he floated the ball into the middle for Simon Ainge to force Jameson into a full length to save with a header.

Quakers took the lead on 33 minutes when Nicholson was barged to the ground just inside the area and the referee pointed to the spot, where Thompson, on his 250th league game, sent Jameson the wrong way for his 90th goal!

Blyth replied with a low shot by Wrightson that flashed just wide.

Quakers had the first chance of the second half, a throw by Muggleton was helped on by Ainge for Nicholson to volley over the bar.
Blyth had a chance when Liddle picked up a quick free kick on the left and crossed into the middle where Maguire headed wide.
Blyth then had a spell of pressure, forcing a couple of corners, but Maddison didn’t have much to do because of the stubbornness and resistance of those in front of him, with Hughes outstanding.

Blyth then made three subs, one enforced, in the space of ten minutes, to try and find a way through.
Quakers then made two subs, Wheatley and Saunders coming on for Thompson and Nicholson.
Blyth had a chance on 76 minutes when a clearance by Hughes came out to Holmes whose low shot was well pushed away by Maddison.

Blyth had a penalty shout when Fewster went down under pressure from Galbraith, but the ref waved play on.

But after that, Quakers kept their discipline well especially inside their own area.

Quakers nearly got a second right at the end when Elliott got through, but Jameson saved well.

On the final whistle, the Darlington players received a loud ovation from the 500 or so travelling fans, with Hughes receiving a special cheer. 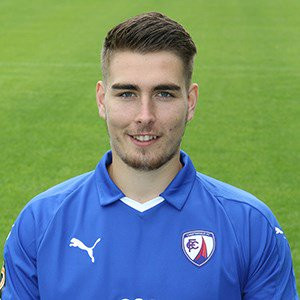 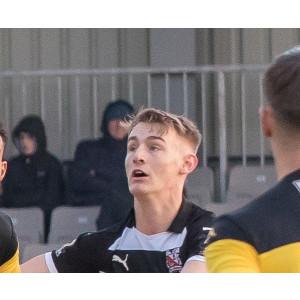 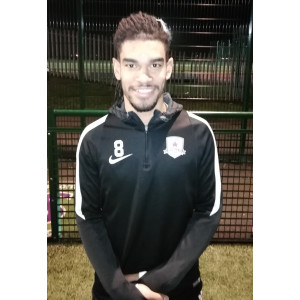