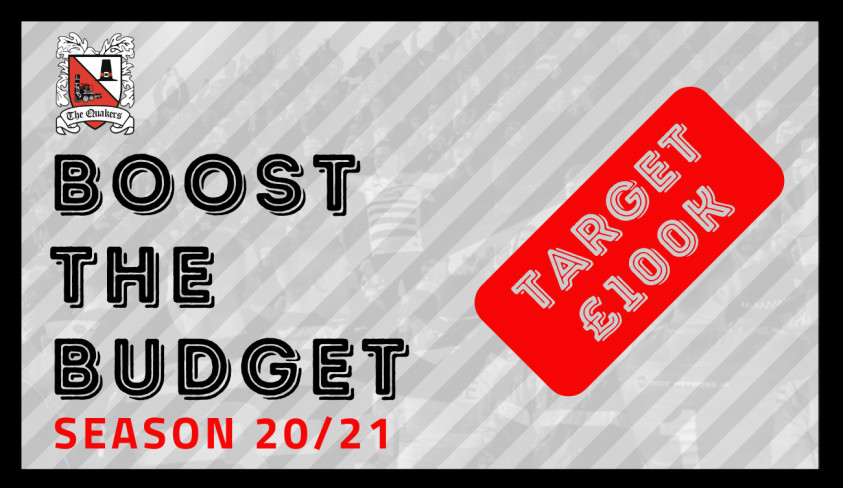 £100,000 target to increase the playing budget available to Alun

DFCSG is today launching its annual Boost The Budget scheme aimed at raising up to £100,000 to increase the playing budget available to the manager for the forthcoming season, in line with the tremendous effort last season.

Almost one year ago, over 500 dedicated fans played a part in increasing the playing budget for incoming manager Alun Armstrong. The appointment of Alun brought with it a new wave of optimism to the Club which resulted in the owners and supporters smashing the original £80,000 target. The final total was a shade over £100,000 – a fantastic achievement and an amount which allowed Alun to do some serious remodelling of the squad.

Upon his appointment Alun pledged to spend your money wisely and build a squad of value for money players from the local area – a pledge he certainly delivered on.

The 2019/20 season will no doubt be remembered for the FA Cup run which the fans had been craving since 2012 – the double pinnacle of which ended with a last-gasp draw away to Walsall followed by a visit from the BT Sport cameras for the replay at Blackwell Meadows. Alun was true to his word that he was going to give the competition a “good go” when he arrived.

As the season has finished prematurely, we’ll never know what might have been in those final nine games of the season. The lads putting in arguably their best performance of the season away to Telford followed up with what turned out to be the final game of the season - a home defeat to Farsley Celtic. A game in which we again played some great football only to be undone by what can only be described as kamikaze defending. Those final two games probably summed up a season in which we played some excellent football but just lacked the cutting edge in both boxes – something which Alun has recently mentioned he’ll be looking to address in the summer – and he’d like your help if possible.

Boost The Budget has become a critical activity in allowing the Club to compete at National League North level by supplementing the playing budget to the tune of around a third of the total budget. Without this investment from our owners and supporters we would find it very difficult to compete at this level.

The 2020/21 season promises to be one of the most challenging to date for many clubs at all levels of football. The sheer number of unknowns currently make planning of all aspects very difficult. Commercial revenue is almost certain to be reduced as businesses across all sectors struggle due to the economic downturn. Setting a playing budget for a club at this level even in more certain times is extremely difficult - even small fluctuations in forecast versus actual revenue can create some gaps in cashflow that are difficult to bridge. The guaranteed revenue from the Boost The Budget scheme really does make the cashflow situation much more manageable.

We’re asking once again if you’d be able to back Alun in his quest to push the Club forwards with the continued commitment that he’ll spend your money wisely to fine tune an already talented squad of players with a clear remit to play an exciting brand of football. Subscribing to the scheme early will allow Alun to tie down the contracts of current key squad members and begin to plan for new arrivals.

The 2020/21 scheme aims to raise £100,000 and will run until Sunday 31st May. Given we don’t yet know when the season may start it may seem strange to set such a short window of opportunity. The rationale here is that we want to be as prepared as best we can be so that we’re ready to react on all fronts when we do get some confirmation of a start date. Calculating a playing budget is at the forefront of this planning.

In these turbulent times we know that making a financial commitment to the Club may not be possible at all. It’s important we all ensure that we’re in a position to look after ourselves and our families first and foremost. If you are fortunate enough to be in a position to invest this season it would help the Club massively in being as prepared as possible.

As usual there are a number of rewards available for doing so.  Contributions can either be made as a one-off amount or spread across 13 months of 56 weeks. For those who are already contributing you should also receive a direct communication via email which allows you to specify if you’d like to waive the final payment due which may clash with the first payment of the new scheme.

We hope you stay safe and well in the coming months until we can again welcome you to Blackwell Meadows to cheer on the team again.