Sloppy Quakers given lesson in finishing by Rovers 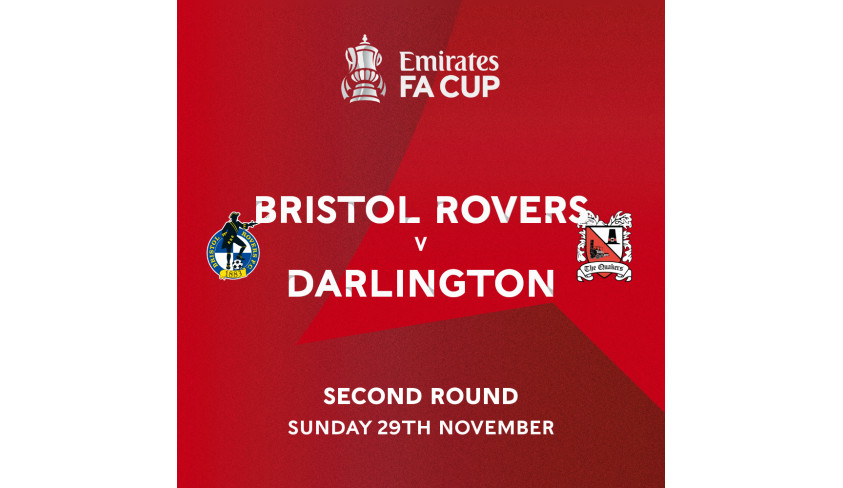 Quakers crashed out of the FA Cup with some poor defending to blame.

Quakers held their own in the first 25 minutes and created a couple of good chances as Rovers couldn't get into the game, but a sloppy first goal opened the door for Rovers.

The home side scored three times just before half time -- one of them a penalty -- and then twice more at the start of the second half, with the referee awarding another penalty.

However, it was alarming at the way Quakers lost their grip on the game in a five minute spell before half time, when they conceded three times.

Quakers had their chances at various points in the game especially at 0-0, but their finishing wasn't as clinical as that of Rovers.

Nevertheless, Quakers can look back on a great run with pride and over £70,000 in TV and prize money -- this was the first time the club had been in the second round for ten years, and had beaten a League One club along the way.

Nicky Hunt on his return from injury, got a couple of good challenges in early on as Quakers settled into the game.

It was a fairly low key start with neither side really threatening.

Quakers had a half chance on 10 minutes when Campbell sent Rivers up the left, but nobody could get on the end of his pull back into the middle.

Quakers got a corner on 12 minutes, and even though it was cleared, Rivers crossed again from the right into the six yard box, where David Atkinson couldn’t quite get on the end of it.

Rovers had the first shooting chance, when a long ball forward was headed away to Luke McCormick, who fired high and wide from 25 yards.

Quakers were awarded a free kick just outside the area on the left on 21 minutes when Campbell was tripped, but he floated the free kick over the top.

Nicky Hunt then went down following a clash of heads, but was quickly back on his feet.

Quakers had a shooting chance on 25 minutes, when Sean Reid laid off a pass by Rivers for Joe Wheatley to fire just wide of the left hand post.

Adam Campbell then played a 1-2 with Rivers on the edge of the box, but his well-hit right foot shot was held by the keeper.

Rovers took the lead against the run of play on 29 minutes. There was a long ball forward from out of the Rovers defence, Atkinson and keeper Johnny Saltmer got in a tangle, and McCormick accepted the gift by rolling the ball into an empty net to put Rovers into the lead.

At the other end, Rivers put Hatfield through, but from a tight angle, he fired into the side netting.

Quakers nearly levelled on 37 minutes when Rivers threaded the ball through for Charman, who hit a first time shot just wide from just inside the area.

But it was 2-0 on 38 minutes when Rovers worked the ball out to the right through Oztumer for Josh Hare to slot past Saltmer.

Rovers were awarded a penalty on 43 minutes when the referee decided that David Atkinson fouled Sam Nicholson as the Rovers striker made a run into the box, and Luke Leahy scored from the spot for 3-0.

And on half time it was 4-0 when Erhun Oztumer dribbled through a static defence and sidefooted past Saltmer.

Quakers made a sub at the start of the second half, Tyrone O’Neill replacing Sean Reid

Rovers were awarded another harsh penalty on 52 minutes. Saltmer saved from McCormick, and the ball ran loose with McMahon challenging Nicholson, who went down and the referee awarded a penalty. Leahy converted his second spot kick of the game.

Quakers nearly pulled one back on 55 minutes. Campbell burst through on the left and squared the ball across the area for McMahon to come and steaming in, fire across the keeper, and against the post.

It was 6-0 on 59 minutes. A corner from the left was nodded down at the far post for Nicholson to prod over the line.

Quakers nearly pulled a goal back, Campbell played the ball into the box for Rivers to have a shot on the turn saved by Anssi Jaakkola.

To their credit Quakers kept going, and O’Neill was just off target with a curler from the edge of the box, and Campbell almost caught the keeper off his line with a 50 yarder.

Here are the goals: https://darlingtonfc.co.uk/news/video-goals-from-fa-cup-exit-available-now