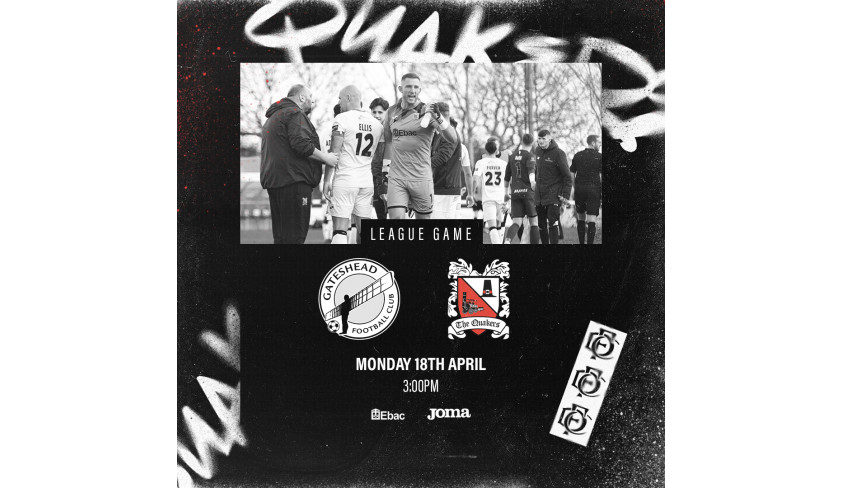 Concede four in the second half

Quakers let a two goal half time lead slip away at the International Stadium and were beaten by the league leaders.

Quakers played some of their best football of the season to lead 2-0 at half time, but Gateshead improved in the second half and exposed Quakers at the back after David Wheater went off with a groin injury.

The game started well for them. They got a free kick about 30 yards out in the third minute, and took the lead.
Nathan Lowe, making his full debut for Quakers, spotted that keeper Filip Marschall was stood well off his line, and cleverly curled the ball into the top left hand corner.

Former Gateshead full back Kallum Griffiths made a good run down the right and found Kevin Dos Santos outside of him, but Dos Santos cross was too close to Marschall.

It was nearly 2-0 when Ben Hedley crossed from the left, and the ball went across the face of goal with Lowe just unable to get a touch, although Quakers claimed they should have had a corner.

Gateshead tried to reply from a quickly-taken free kick, but Scott’s shot was blocked by Griffiths.

Quakers got a penalty on 17 minutes when Lambert cut in from the left and was bundled over in the area by Tinkler, and Lambert sent the keeper the wrong way from the spot – Quakers first successful penalty in five attempts! It was also Lambert's eighth goal of the season.

Gateshead tried to respond, and Taylor got down to save a low shot by Macauley Langstaff.

It was nearly 3-0 on 24 minutes when Adriano Moke threaded the ball through to Junior Mondal, whose left foot shot was saved by Marschall.

Purver found Griffiths down the right, and he whipped a good low ball into the middle, and Mondal was just inches away from connecting.

Gateshead appealed for a penalty when Greg Olley’s shot was blocked by Alex Purver, but the referee waved play on.

The heed had some late pressure in the half, but Quakers held on well.  The first half performance was possibly one of their best of the  season so far
Half time 0-2

Gateshead nearly pulled one back on 51 minutes. Tinkler crossed from the right for Ward to head towards goal, but Taylor saved on the line.
Gateshead then won a corner which ended with Langstaff firing over. The home side were getting more and more frustrated.

Quakers were forced into a sub on 57 minutes when David Wheater went down injured, and was replaced by Alex Storey.

They opened up the defence on the left with a good pass by Lambert to Mondal, but his cross was blocked.

Gateshead had another penalty shout turned down on 65 minutes when Olley tried to turn in the box and went to ground, but the ref waved play on.

Gateshead got back into the game on 66 minutes when Olley ran at the Darlington defence, played a couple of 1-2s, and slotted the ball into the bottom right hand corner.

Quakers tried to hit back and after a good move down the left, Hedley’s cross was intercepted at the near post.

But Gateshead levelled on 72 minutes when Langstaff chased a long ball over the top from Bailey, and poked it past the advancing Taylor.

Quakers then put Danny Ellis on for Kevin Dos Santos.

After Langstaff’s shot on the turn went over the bar, Taylor made a point blank save from Scott.

They were caught by a long ball again on 84 minutes, when Langstaff burst through and slid the ball past Taylor.

It was 4-2 in stoppage time when Connor Malley got through on the left, and fired past Taylor.