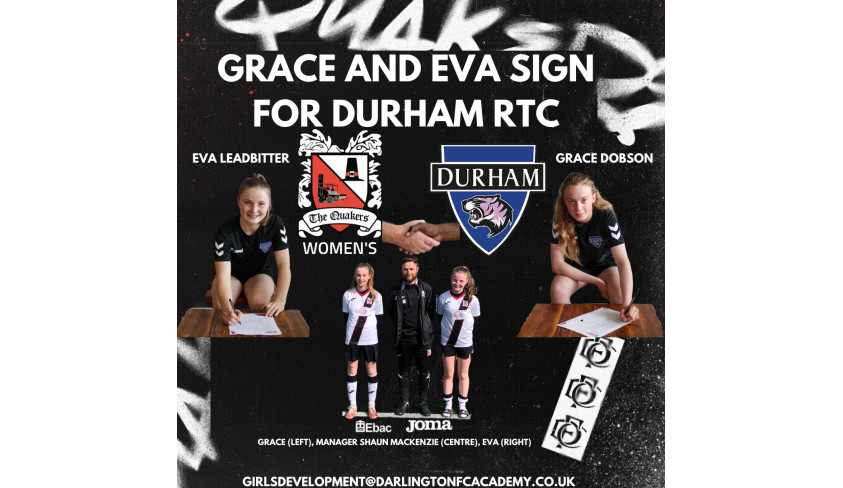 The next step on the football ladder

Everyone at Darlington FC Women and Girls Football would like to congratulate Grace Dobson and Eva Leadbitter who will sign for Durham Regional Talent Club in September.

Grace and Eva have both been at the club for three seasons and both started their girls footballing journey with Darlington F.C. We are extremely proud of them both and wish them the best of luck at Durham.

Women’s Manager Shaun Mackenzie, who also coaches the girls on a Saturday as manager of the U13 Girls Quakers said:"I am absolutely delighted to see the girls progress to the RTC, they are two of the most hard working girls I’ve ever had the pleasure of coaching and they fully deserve it.

"Grace came to the club as an U10 after previously playing in a boys' team. She has been absolutely phenomenal from day 1 and a major part of our success over the last three seasons. She scored 90 league goals in 42 league games and many more in friendlies, cup games and tournaments, from the left wing. 41 goals in her first season helped us win the league! She has unbelievable talent and is a fantastic finisher, but what sets her apart from others, is her willingness to learn and strong work ethic, she is first to every training session and that attitude will take her far. I wish you very best Grace.

"Eva came to the club at the start of the U11 season and although previously not played football much, as she played netball and hockey, she had natural ability.  Her progression in such a short space of time is incredible and she’s destined for the top. Eva has played centre midfield and has scored 37 goals over the past three seasons and assisted many, as well as countless player of the match awards. She has a bit of everything, she’s strong, powerful, excellent on the ball and technically gifted. Her attitude towards football is everything you would want as a coach and Durham will be lucky to have her.

"We would like to say a massive well done to both girls. We have been lucky enough to have them at the club for the past four years and now is the time for them to further their prospects and grab that opportunity with both hands. Remember to come back and visit when your England internationals, girls!"

Everyone at Darlington FC would like to wish Grace and Eva all the best in their future careers.