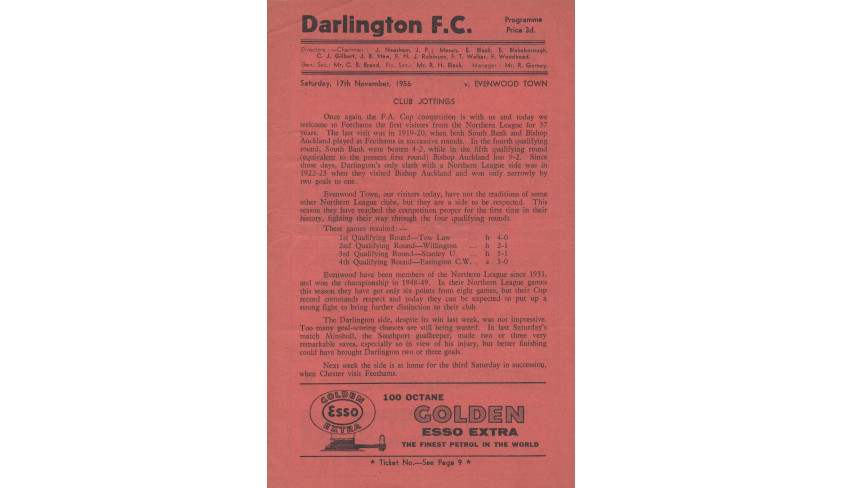 A wander down memory lane with Simon Weatherill. 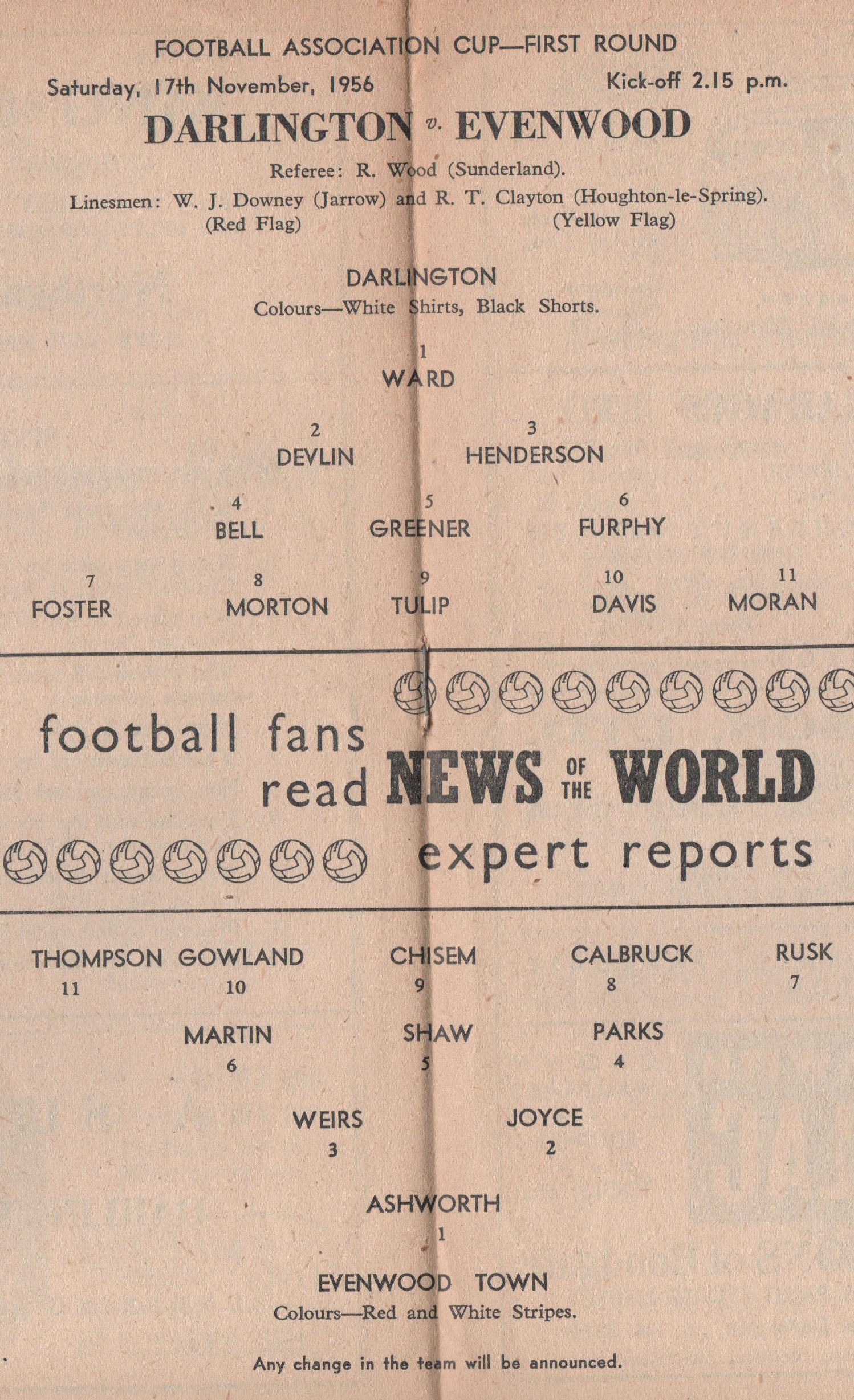 Darlington’s longest serving manager in the post war period was Bob Gurney. He took over as boss in March 1952 and remained in charge until October 1957. During that time Gurney was the man responsible for the signing of several club legends, such as Ron Greener, Brian Henderson and Ken Furphy. In the summer of 1956, as the club prepared for the 1956/57 season, Gurney made nine new signings as he tried to improve on a 15th place finish in Division 3N from the previous campaign.

The team made an inconsistent start to the season and by mid-November they sat in 17th place in the Division 3N table with 17 points from their 18 games so far. The first round of the FA Cup would provide some distraction from their poor league form and when the draw was made there was the added excitement of a local tie, as the Quakers were drawn to play Evenwood Town away from home. Evenwood would be making their first ever appearance in the competition proper after fighting their way through four qualifying rounds, beating Tow Law, Willington, Stanley United and Easington CW on their way. They currently sat third from bottom in the Northern League with 6 points from 8 games but had three or four games in hand on most of the other teams because of postponements due to their cup exploits.

As soon as the draw was made both clubs approached the FA to have the tie moved to Feethams. Evenwood’s Welfare Ground had no seating, no real terracing and only one stand providing standing accommodation for 300. There were two entrances to the ground and no turnstiles. The police intended to restrict the attendance to 4000 and make the game all ticket. There was the added complication of Northern League neighbours Bishop Auckland also being at home in an FA Cup tie against Tranmere Rovers. After initially turning down the request the FA relented and allowed the tie to be moved to Feethams. It would take place on November 17th.

Darlington would welcome back two players who had been missing through injuries. Inside left Dickie Davis had missed nearly two months and centre forward Bill Tulip returned after missing the last three games. Jimmy Cannon and Tommy Lumley made way.

A crowd of 7667 (paying receipts of £846 4s 3d) were at Feethams for the 2.15 kick off. Both sides contributed to a fast and bright opening with end to end play that didn’t really threaten either goal. The first real chance of the game fell to Evenwood when Chisem was played in by Calbruck but the centre forward drove his shot wide when well placed. The Quakers responded and Keith Morton fired a shot at goal that visiting keeper Ashworth did well to turn round the post. The opening goal arrived on 12 minutes when Darlington were awarded a penalty. Jimmy Moran was attempting to dribble his way through but he was stopped when the ball was handled by a defender. Harry Bell stroked home the spot kick. The goal lifted the home side and they pushed forward looking for more. They scored a second three minutes later through Morton. Moran played in a long cross from the left beyond the far post, where it was met by Ron Forster who pushed it back into the goalmouth for Morton to score. Darlington were completely on top now and the Evenwood goal came under heavy pressure. Davis fired narrowly wide, then Ashworth had to race out of his goal to deny Forster, then Morton hit a pile driver that was just wide of the mark. In a rare attack Calbruck forced Ron Ward into making a save, but it was mainly one way traffic and the Quakers added a third with a superb solo effort on 33 minutes. Morton played the ball out wide to Forster, who cut infield, cleverly picked his way past two defenders and from the edge of the penalty area fired a shot across Ashworth into the far top corner. Evenwood refused to lie down and two minutes later they pulled a goal back. Chisem raced past two static home defenders and drove the ball hard into the net giving Ward no chance. Both sides went close in the closing minutes of what had been an entertaining half. For the Quakers, Davis was unlucky with a shot that went narrowly wide. Then Evenwood went close to a second in a goalmouth scramble from a corner that Brian Henderson cleared off the line. Half time: Darlington 3 Evenwood 1.

Six minutes into the second half the home side added a fourth. Davis played a superb through ball into the path of Bill Tulip who held off Taylor and slotted the ball past Ashworth as the keeper came out to meet him. Ward was called into action again to keep out a shot by Thompson but by now the Quakers were completely on top and mounting attack after attack. Ashworth was having a great game though and pulled off another good save from Forster by tipping the wingers effort over the bar. The keeper was helpless though as he was beaten twice in quick succession in the 57th and 58th minutes, by two Morton strikes to complete his hat trick. Davis playing him in for the first of his quick fire double, then a minute later Forster setting him up. With the tie won Darlington eased off and Evenwood came more into the game. They scored a second goal after 81 minutes when Rusk crossed from the right and Calbruck headed home. A minute later the Quakers restored their five goal lead with a clever Tulip header that completely deceived Ashworth and completed an emphatic 7-2 victory.

While Darlington were dealing with Evenwood, eleven miles up the road Bishop Auckland were accounting for Tranmere, beating them 2-1 at Kingsway in front of 7000 fans. When the draw for the second round was made Darlington were handed an away tie at Carlisle United, where they were beaten 2-1 in front of 14,761. Dickie Davis scoring for the Quakers. Bishops were also beaten in the second round, going down 3-1 at Rhyl.

The programme for the 1956/57 season consisted of 12 pages and cost 3d. The front page consisted of Club Jottings, practically the only reading matter in the entire programme. Other features were the half time scoreboard, a sports quiz, team line-ups and fixtures and results from first and reserve teams.