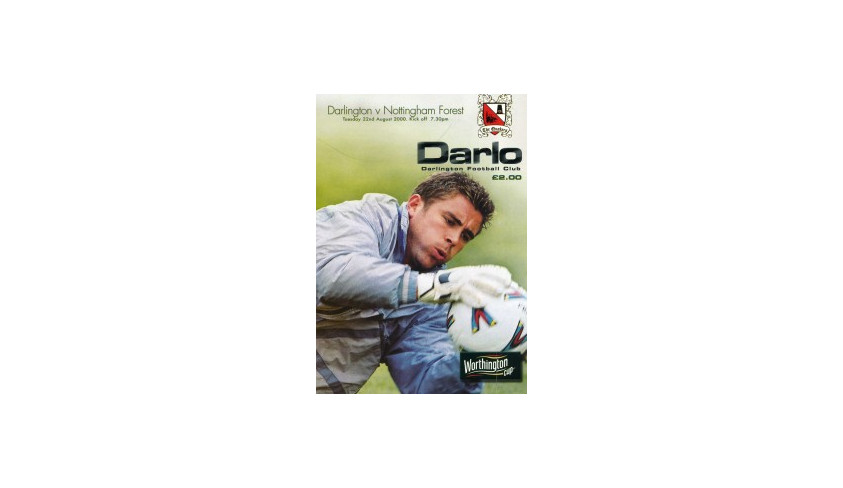 When we faced one of the games' big names

In the latest of our Memory Match series, Simon Weatherill looks back at our League Cup tie against Nottingham Forest in August 2000.

The 2000/01 season kicked off with Gary Bennett at the helm after another summer of turmoil at Darlington Football Club. The previous campaign had ended with a play off defeat at Wembley by Peterborough, and the summer months saw the break up of the team that had so nearly clinched promotion. A much reduced wage bill saw the departure of regular first teamers Marco Gabbiadini, Neil Heaney, Peter Duffield, Michael Oliver and Steve Tutill. Then, just ten days before the start of the new season, manager David Hodgson walked away from the club after another clash with chairman George Reynolds, this time after Reynolds made public all the players wages and bonus payments. Reserve team manager Bennett was immediately installed as the new manager.

The season began with two 1-1 draws, against Rochdale and Exeter City, and then attention switched to the Worthington Cup. Darlington had been paired with Nottingham Forest in the first round. Forest had been relegated from the Premiership two years previously and were rebuilding their team under player manager David Platt. They still had several players from their Premier League days and so would provide a stiff test for the Quakers. The home side were forced into changes as they’d started the season with Lee Nogan and Dutchman Tom Kaak in partnership up front, but they were both carrying knocks and missed the Forest game. Their places were taken by Jesper Hjorth and local youngster Gary Williamson, who made his first start for the club. Brian Atkinson missed the game due to tendonitis on his knee, and Bennett also chose to rest goalkeeper Andy Collett to give new signing Frank Van Der Geest a game in goal.

A crowd of 4724 turned out at Feethams on August 22nd to see the Quakers make a promising start to the first leg. Williamson turned and fired straight at visiting keeper Dave Beasant and in their next attack Craig Liddle glanced a header across the face of goal and just wide. Darlington took the lead that their early play deserved after 15 minutes. Chris Bart-Williams had an attempted back pass into his own box intercepted by the alert Williamson who was upended by Tony Vaughan. With regular penalty taker Atkinson missing from the side, Stuart Elliott took on the responsibility and easily beat Beasant from the spot. The lead only lasted five minutes though, when Gary Himsworth tripped Vaughan in the box and Bart-Williams stepped forward to confidently convert the penalty for the Forest equaliser. Two minutes later the visitors nearly took the lead when Stern John cleverly worked his way into the box but fired straight at Van Der Geest. In an entertaining game the Quakers continued to create opportunities and Elliott nearly claimed his second with a 30 yarder that flew just past the post, then Martin Gray hit a powerful drive that Beasant just managed to hold onto, diving to his right. Forest always looked dangerous and went close to a second just before half time when Van Der Geest saved with his foot from a close range Marlon Harewood effort, with Liddle doing well to block the follow up from Gary Jones. Half time 1-1.

Darlington started the second period brightly and went close only four minutes into the half. A Gray cross from the left was only inches away from the unmarked Williamson at the far post. A minute later it was Williamson again who was denied his first senior goal by a good save by Beasant, diving at the foot of his post. Jesper Hjorth was substituted after 58 minutes, replaced by Mark Angel, who lined up on the wing, allowing Glenn Naylor to move up front into Hjorth’s position, a move that produced immediate dividends as the Quakers regained the lead on the hour mark. Elliott’s pass found Himsworth running into the area and he pulled the ball back perfectly for Naylor to sidefoot home.

The response from Forest was very nearly immediate, as only a minute later, David Prutton had a header towards the bottom corner well saved by Van Der Geest. David Platt introduced himself off the bench and within ten minutes Forest were level again. Bart-Williams found Alan Rogers in space on the left and his left foot drive took a deflection off Neil Aspin into the net past the helpless Van Der Geest. Darlington almost snatched victory in the 83rd minute when Naylor cleverly opened up the Forest defence and set up Williamson, but his effort rolled agonisingly wide. The Quakers had acquitted themselves well against a team from two divisions above them and could be pleased with a 2-2 draw.

If Gary Bennett was happy after the first leg, he must have been absolutely delighted after the second leg in Nottingham. After going behind to an early Stern John goal (after 9 minutes) the Quakers gradually played their way into the game and equalised through a Paul Campbell header after 70 minutes. Then, with extra time looming, Stuart Elliott clinched an unlikely victory with an amazing strike from the half way line five minutes from time. Beasant cleared the ball from the corner of his box and it was met by Elliott in the centre circle, who crashed his first time shot into the net before Beasant could get back. Their reward for a brilliant victory was a second round tie against Premiership Bradford City. Darlington couldn’t repeat their giant killing act though and went out of the competition, losing 1-0 at Feethams, before being thumped 7-2 in the second leg at Valley Parade.

The programme for the 2000/2001 season consisted of 36 pages, cost £2 and was printed by Hillprint in Bishop. Full colour throughout, the front cover was a photo from a previous game. Inside were From The Dugout by Gary Bennett, a page of general football gossip, two pages on today’s opponents, a page of current season statistics, a Journalists Page, action photos from previous games, Whatever Happened To? (where Leigh Edwards traced former players), Football in the Community (with Kevin Stonehouse), a Player Interview with one of the first team squad, Memory Lane (looking back at matches 10, 20 and 30 years ago), Captains Page with Martin Gray, reserve and youth team news, a supporters club page, results and line-ups for the current season, and the team line-ups on the back cover.