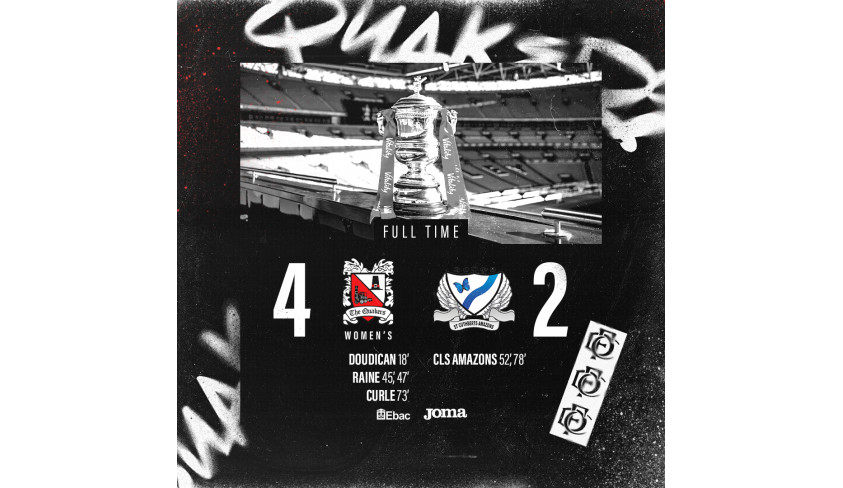 Our Women’s team are through to the next round of the Vitality Women’s FA Cup!

The Women beat Chester-le-Street Amazons 4-2 on Sunday afternoon in front of a healthy crowd of 175 at Eastbourne Sports Complex, and now they play away at Hartlepool Pools Youth on Sunday 3rd October in the second qualifying round.

Manager Shaun McKenzie said; “It was another very good performance by everyone concerned. We played some very good football and scored some good goals. I thought that we always controlled the game, and our forwards were always a threat.

Darlington were missing a couple of key players in what was expected to be a tight encounter. The first quarter of an hour was tentative with Darlington midfielders Toni Upton, Olivia Whitworth and Aimee Dagnall dominating possession, Darlington got the first shot on goal but not long after CLS Amazons had their first shot well saved by the Darlington keeper Ellen Atkinson on her debut for the club.

On the 18th minute mark, the first goal came for Darlington when relentless attacking play and good work in the box resulted in a deft touch by number 8 Emma Doudican followed a decisive predatory finish.  Darlington remained dominant throughout the first half allowing Doudican, Sophie Curle and Hattie Raine to create a number of chances.

On the brink of half time, Darlington scored again with some great footwork from Dagnall allowing the ball to be laid off to Raine for an arcing top corner wonder strike to take Darlington into the second half 2-0 up.

The second half started fast with Darlington attacking quickly and after strong battling from Bright, she got the ball to Curle, who with dazzling feet found space to unselfishly play the ball across the box for Raine to finish for her second of the game.

After 52 minutes CLS scored against the run of play when a defensive mix up led to the striker sneaking in and squeezing in a goal which turned the tide of a game.

CLS became more dominant and it took a good punch from Atkinson and also a last ditch tackle from Carter to keep them at bay. CLS then had the ball in the back of the net on 62 minutes after a punch out from the goalkeeper rebounded over her and was put in but it was ruled out for offside.

On 73 minutes the ball was played out to Raine who whipped the ball in for Curle to take it neatly down on her chest and then finish smartly into the bottom corner. 4-1 Darlington.

Only a few minutes later CLS were awarded a penalty after Atkinson was harshly adjudged to have fouled . The penalty was dispatched into the bottom corner.

CLS dominated the rest of the game with relentless attacking pressure but the calm dominating play of Wearmouth winning every header and showing maturity beyond her years meant that Darlington saw the game out to claim their maiden FA Cup win and to progress to the next round.

Lee on for Whitworth 45’

Garnett on for Peart 75’

Mannick on for Bright 82’

The next game is at Gateshead Leam Rangers on Sunday in the league, kick off 2pm