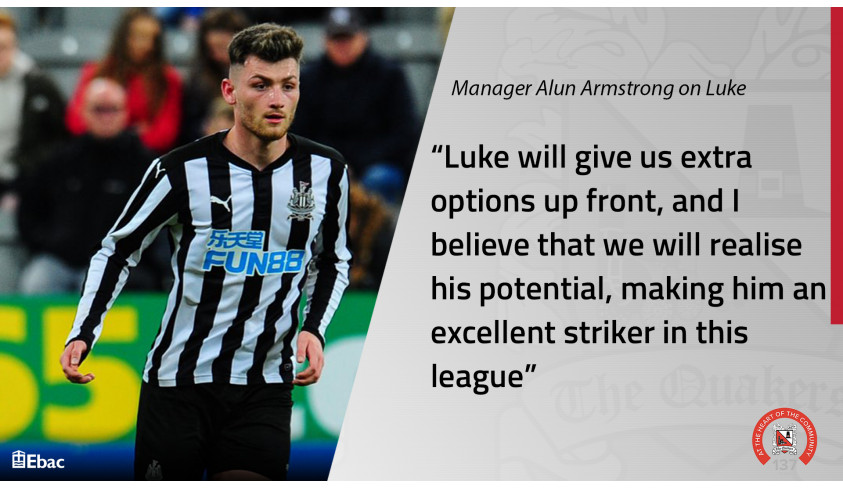 Luke, 22, has been a regular in Newcastle’s Under 23 side in recent years, and has scored 30 goals in 81 games for them during that period, but never broke into the first team. He also had a brief spell with Accrington Stanley in 2018, and played three times for Newcastle Under 21s in the Football League Trophy last season.

Darlington manager Alun Armstrong has been tracking Luke for a year, and said; "Luke has shown plenty of promise at Newcastle, but his chances of progressing there were very limited.

"He will give us extra options up front, and I believe that we will realise his potential, making him an excellent striker in this league.

“He was someone I tried to get on loan twice last season but Newcastle wouldn’t let him out. He did have other clubs higher up talking to him but I managed to convince him to join us -- he is good friends with Jamie Holmes which I’m sure helped with his decision.

“He’s different to what we’ve got, being 6’1” and athletic. Now it’s up to us to help him get him back on track as he’s still young.”

Luke, who signed for the Magpies when he was 14 years old, said; "I was really impressed by what Alun told me about the club, I'm really looking forward to playing and scoring a few goals."

Watch out for a Zoom interview with Luke later!

We'd like to welcome Luke to the club, and wish him every success with us!

The signing is subject to league and FA approval.