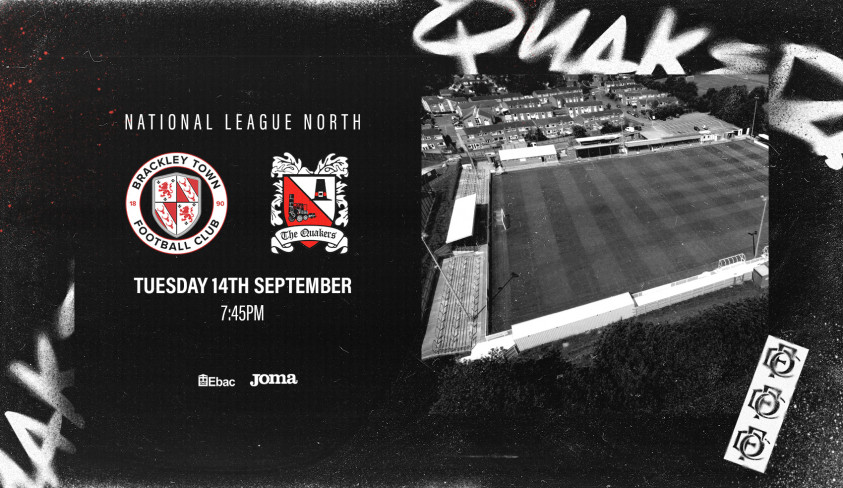 Cass, Luke and Will with the goals

Quakers won their first game of the season in style at Brackley tonight.

The second half Blyth performance provided a solid foundation for them, and with Jake Cassidy and Jake Cooper outstanding, they played some excellent football.

Cassidy led the line superbly, while Cooper didn't let anything past him. The defence, which has been criticised quite a bit this season, gave hardly anything away.

Brackley were content to let Quaker have possession in the opening few minutes, but Joe Wheatley nearly unlocked them with a ball through for Kallum Griffiths who had made ground from right back, but a defender got to the ball first.

Quakers took the lead after 8 minutes. Will Hatfield played the ball through the middle for Jake Cassidy to control, sidestep a defender, and then tuck into the bottom corner of the net -- only the third goal that previously unbeaten Brackley have conceded this season, and the first time Quakers have taken the lead in a match. It was also the former Wolves striker's second goal of the season.

Quakers then got a free kick for a foul on Griffiths on the right, but Hatfield’s low free kick was stopped at the near post.

Brackley were reduced to ten men on 15 minutes when Jarrett Rivers was flattened by a challenge from Brackley’s Jimmy Armson, who was shown an instant red by the referee. Rivers was able to continue after treatment.

Matt Lowe made a good run down the right for Brackley, but Tommy Taylor managed to first his cross away, and then Quakers cleared another free kick at the second attempt.

Luke Charman, playing on the left, nearly made it 2 just on half time. He got the ball on the left hand side from George Smith, got into the box, and from an acute angle struck a low shot that Danny Lewis could only parry, with the ball eventually cleared.

Brackley let Quakers have the ball, and it nearly cost them when Charman crossed for Cassidy to beat Lewis with a diving header, but the flag went up for offside, much to Cassidy's surprise.

Quakers nearly went 2-0 up straight after half time with a low free kick by Hatfield that took a deflection off a defender and Lewis saved well at the foot of his post.

Brackley went up the other end and equalised. Walker got the ball into the box for Tre Metford to fire across Taylor into the net.

Quakers went back in front on 59 minutes. A patient build up involving several players inside the Brackley box ended with Rivers finding space, and he struck a right foot shot that Lewis parried into the air, and Charman was on hand to head the ball into the empty net.

It was 3-1 on 67 minutes. Charman did superbly well to keep the ball in by backheeling it for Hatfield, who had time to control the ball and strike a measured right foot shot into the bottom corner of the net, his third goal of the season.

Hatfield nearly got a fourth with a dipping free kick from 30 yards that went just over the bar.

Brackley pushed forward late in the game, and a long range effort by Murombedzi was held by Taylor, but by then Quakers were home and dry.