Come and see our women's team play at Blackwell Meadows 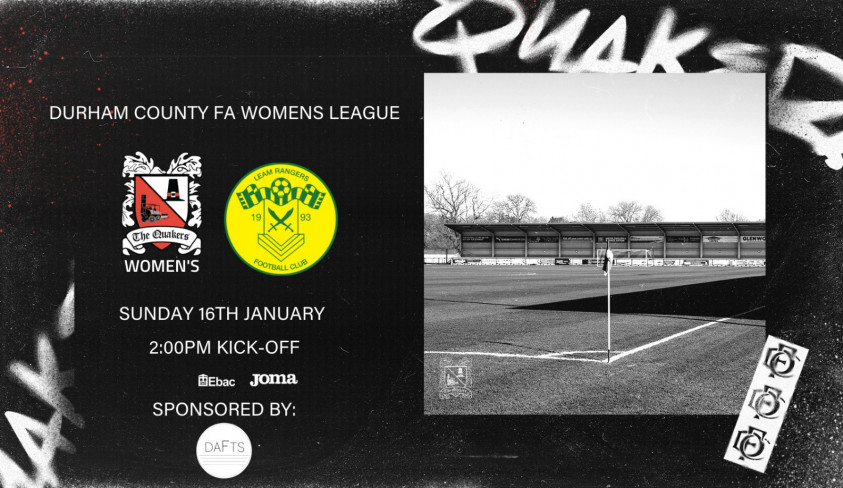 Darlington FC will be staging our first ever women’s match at Blackwell Meadows on Sunday!

Our Women’s team are at home to Gateshead Leam Rangers in a big game in the Durham County FA Women’s League, with both teams aiming to win the title. Quakers are seventh in the table with 18 points from eight games, while Gateshead Leam are second with 23 points from twelve games.

Until now, our Women’s team have played home games at Eastbourne – they’re unbeaten at home this season -- but on Sunday we want to raise their profile by playing on the same pitch as Alun Armstrong’s team, in front of (hopefully) a good crowd giving them plenty of encouragement. Darlington Football Club also wants to demonstrate that it is open to everybody in our community. We have invited several VIPS to the game.

Women’s football is becoming more and more popular, and Darlington FC want to be part of its growth! As well as our women’s team, we also have girls’ teams of various ages (and boys’ teams of course!) So why not come along, and give them your support!

Team manager Shaun MacKenzie said; “All of our players are really excited about playing at Blackwell Meadows.

“Considering that the team was only formed last summer, we have done superbly well this season, and our players have formed a great understanding and team spirit. We have played some great entertaining football – we are unbeaten in our eight league games so far, and have scored 33 goals. We're well worth coming along to watch."

When the two sides met earlier in the season, the score was 3-3, so goals are guaranteed on Sunday! The side's top scorer is Sophie Curle, who has scored 18 goals in the league this season.

and the matchball is being sponsored by NC Group Ltd. We are grateful to both organisations.

Our logistics are being sponsored by Ingleton Site Management

Admission is £3 for adults and £2 for concessions – you can buy a ticket here:

If you’re interested in playing for one of our teams, – either women’s, girls’, youth or academy -- then e mail us on dave.watson@darlingtonfc.org

We'd like to thank Darlington Rugby Club for their co-operation in staging the fixture.