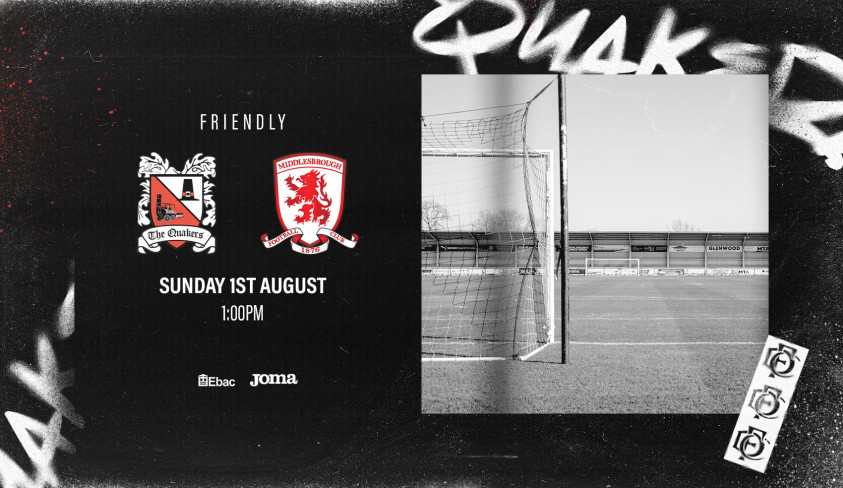 The start of the new season is just a fortnight away, why not pre-order your new shirt here?

Quakers produced a much better performance in a 1-1 draw with Middlesbrough at Blackwell Meadows.

Quakers played some very good football after they went a goal behind, and created a number of good chances which they wasted until Junior Mondal scored after half time.

But triallist Andrew Nelson nearly won the game with a powerful shot that came back off the bar in the last minute.

Boro went ahead with the first attack of the game on 2 minutes, when Josh Coburn got on the end of a blocked shot and poked the ball past Tommy Taylor.

Quakers had a penalty appeal turned down on 5 minutes when Jarrett Rivers cut into the box from the right and was challenged by a defender, whose clearance seemed to rebound off another defender’s arm, but the referee gave a corner instead.

Quakers went close on 9 minutes. Will Hatfield curled a free kick over from the right for Alex Storey to head wide of the right hand post.

Alex Purver sent Luke Charman running into the box with a good ball on 14 minutes, and Charman tried to set up Rivers, but his pull back was intercepted.

Quakers continued to grow in confidence, knocking the ball around well, and nearly levelled on 25 minutes when a right wing corner was cleared as far as Ben Hedley, who took a touch and curled a right foot shot from 30 yards that skimmed the top of the net.

There was another chance on 32 minutes when Purver played a deep ball into the box for Junior Mondal to turn back to Will Hatfield, whose shot was saved by Sol Brynn.

And there was another opportunity on 36 minutes when Brynn punched a Hatfield free kick as far as Kevin Dos Santos, who tried a left foot shot from 25 yards that went wide.

Here's our half time ad roll, thanks to Alex Holland:

The second half started in the same fashion, with Charman hitting a left foot shot that dipped just over the top.

However, Boro nearly scored a second, when the Darlington defence was split by a through ball to Coburn who was clean through, but Taylor saved well at his feet.

Quakers deservedly equalised on 56 minutes when Dos Santos got round the back of the defence on the left, and after his shot was blocked, Mondal, who started his career at Middlesbrough, was on hand to put the ball in the net.

After Quakers made six subs, they nearly went in front when Cole Kiernan crossed from the right, and Jake Cassidy, off balance, fired wide.

There was another chance on 73 minutes when Cassidy crossed for Nelson to cleverly lay the ball off for Cole Kiernan to have a shot well saved by Brynn.

Quakers’ sub keeper, Lucas Martin, pulled off a good diving save from a Connor Malley free kick on 78 minutes.

And the keeper pulled off another good block soon after from Steven Walker after the Boro striker had dribbled through.

Quakers nearly won it in the last minute, when Nelson hit a blistering drive that beat Brynn all ends up, but rebounded back off the bar.