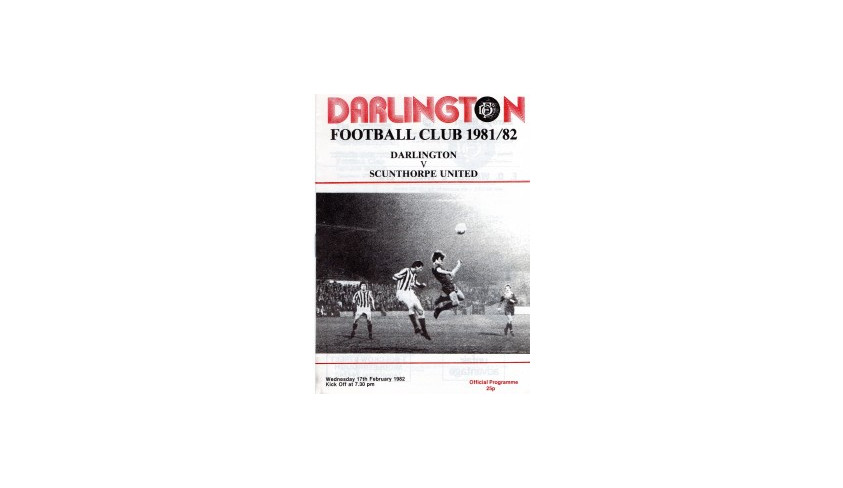 Another year, and another financial crisis at Darlington Football Club. This particular year was 1982, and although the Quakers had experienced many financial problems during their 99 year history, this one was so severe that it threatened the very existence of the football club. At the AGM in November, record losses of £48,000 were reported from the previous season, bringing the club’s total debt to £74,000. It was also reported that the club were losing over £800 per week, but chairman Leslie Moore insisted that there was no cash crisis. Things became considerably worse in December and January however, when three consecutive home games were postponed due to bad weather, which meant that no money was coming in through the turnstiles. The problem reached crisis point at the end of January, when a special press conference was called at Feethams and Moore announced that if £50,000 wasn’t raised within the next six weeks the club would fold. They were now £95.000 in debt and had zero cash available to pay any of their bills. (The weekly wage bill was £4,000).

There was a very real danger that the club would not survive to celebrate their centenary year in the following season. The record losses from the previous season were even more worrying because they coincided with the team having one of their best seasons for many years, finishing 1980/81 in 8th place. Manager Billy Elliott was operating with a small squad, basically relying on fifteen players throughout the season. His only significant signing during the summer had been Kenny Mitchell, brought in from Newcastle. When Scunthorpe visited Feethams on Wednesday February 17th, they found the Quakers struggling to find any kind of form. They were in a run of only one win from seven games, played since the turn of the year. (Happily for Quakers fans, the one win that they had managed had been a 2-1 away win at Hartlepool.) They had prepared for the Scunthorpe game with a 3-1 reverse at Peterborough, where all three Posh goals were down to defensive mistakes. Elliott threatened changes, but found his options limited due to the size of his squad, and ended up naming an unchanged team for the Scunthorpe visit. Darlington sat in 17th place in the Division 4 table with 25 points from 26 games. Their visitors sat two places lower, in 19th, level on points but with a game in hand, so the game was important to both clubs in their battle to avoid the bottom four re-election places.

The appeal for extra support seemed to fall on deaf ears as only 1633 braved the cold and rain to see the game. They saw the home side make a shaky start as Scunthorpe snatched the lead after only four minutes. A weak defensive header by Kevan Smith was seized upon by David Stewart who blasted home from 20 yards out. Darlington played their way into the game and equalised on 22 minutes when Smith made amends for his error by creating the opening. He headed down Dave McLean’s free kick and David Speedie hooked in his eighth goal of the season. Play was scrappy until after the break with both sides failing to carve out any clear cut chances, although the Quakers were always uncomfortable against the quick breaking Scunthorpe counter attacks.

Two goals in two minutes in the second half turned the game dramatically. The home side were awarded a penalty after 61 minutes when Andy Keeley needlessly handled the ball just inside the box. McLean sent the keeper, Paul Johnson, the wrong way from the spot but the keeper managed to save with his feet, and then recovered brilliantly to parry Speedie’s follow up. In the goalmouth scramble that followed McLean managed to hook the ball home at the third attempt. Two minutes later it was 3-1, as a trademark drive by Alan Walsh from the edge of the area was palmed away by Johnson, but only as far as Peter Skipper, who tapped the loose ball into the empty net for his first goal of the season.

Quakers were now in complete control and it was no surprise when they scored their fourth in the 70th minute. Again it was from the penalty spot, again for a hand ball, this time awarded against Tony Arins. Walsh took on the responsibility and made no mistake by hammering home an unstoppable shot. The margin of victory could have been even greater, as there was still time for John Stalker to slice an easy chance wide of the post as Scunthorpe were left well beaten.

The 4-1 win saw the Quakers embark on a good run of form that moved them up the table away from trouble. Their next 14 games included 9 victories and an impressive 34 goals, that saw the team move into the top half of the table, as high as 10th position at one point. They finished the season in 13th place, with 58 points from their 46 games. Top scorers in the league were Speedie with 17 and Walsh with 13.

The whole town had rallied round with various money making schemes to raise the funds required to get the club through to the end of the season. Two big friendly games were also organised to boost the survival fund. Alan Durban’s Sunderland visited Feethams at the beginning of March and Lawrie McMenemy brought his star studded Southampton side to visit in April, to help ensure that the £50,000 target was reached before the end of the season.

The programme for the 81/82 season consisted of 16 pages and cost 25p. Initially it was printed by Parkgate Press in Darlington, but mid season, when the financial problems hit the club, printing was switched to the Printroom in Northallerton. Content varied from programme to programme, but generally consisted of an action shot on the front cover, columns by manager Billy Elliott and secretary Dave Thorne, Encounters (looking back at previous matches with our opponents), two pages of pen pictures about our visitors, Fourth Division Scene by Frank Tweddle, Pro-File on a member of the first team squad, fixtures and results of first team and intermediates and the team line-ups on the back cover.