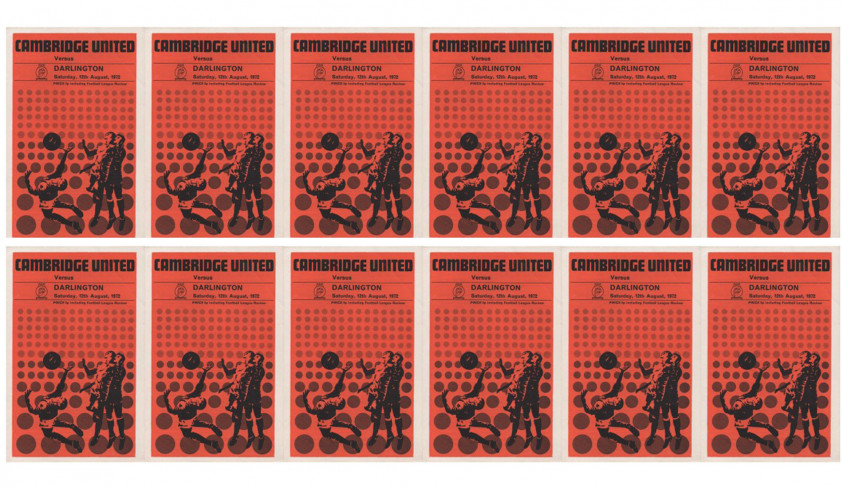 Simon Weatherill returns with his excellent Memory Match series, today with the 3-0 away win a...

Simon Weatherill returns with his excellent Memory Match series, today with the 3-0 away win at Cambridge United on 12th August 1972.

The first day of a new season is always a time for great hope and optimism for any football fan. However, the results on day one don’t always reflect what might happen in the rest of the season. It is often a day for an unexpected result. When the fixtures were announced for the 1972/73 season, the Quakers were given a difficult away trip to Cambridge United on the opening day. It would be United’s third season as a Football League club. They’d been elected into the “club of 92” in 1970 (replacing Bradford Park Avenue) and in their two previous visits the Quakers hadn’t yet registered a goal, losing 0-2 and 0-6, so a trip to the Abbey Stadium would be a tricky opener.

Darlington had spent the whole of the previous campaign at the wrong end of Division 4 and had only saved themselves with a good run in the closing weeks of the season. They’d won their last three away games which helped to move them up to sixth from bottom in the table, escaping the dreaded bottom four re-election places by 2 points. There’d been changes during the summer and hopes were high that things would be different in the 72/73 season. New manager Allan Jones had added four new players to his threadbare squad, but he had lost some vital experience as well. Ken Hale had left the club to take up a coaching role at Halifax and long serving full back John Peverell had to retire from the game due to a long-standing thigh injury. The 31 year old Peverell had appeared 465 times for the Quakers, placing him second only to Ron Greener in the clubs all time appearance list. “Pev” would be sorely missed from the Quakers defence. Incredibly, Peverell’s retirement meant that 20 year old Peter Carr was now the club’s longest serving player! Jones had added goalkeeper Ernie Adams, signed from Crewe, full back Clive Nattress from Blackpool, midfielder Steve Holbrook from Hull City and winger Don Burluraux from Middlesbrough. All four new players would play at Cambridge. Alan Sproates was unavailable as he was finishing a coaching job in Canada, while Norman Lees was ruled out with an ankle injury. Centre forward Peter Graham had also been struggling all week with an ankle problem. He travelled to Cambridge with the team but was only considered fit enough for a place on the bench.

4178 were at the Abbey Stadium to see the new season kick off in bright sunshine, and it only took the Quakers eight minutes to open the scoring. Under pressure from Alan Harding, the Cambridge right half Dennis Walker attempted to play the ball back to his keeper Peter Vasper but he under hit his pass and Harding nipped in to stab the ball home before the keeper could claim it. The visitors continued to press forward and Colin Sinclair had two attempts at goal in quick succession. First he headed narrowly over the bar and then he seized on more dodgy home defending to fire in a shot from 30 yards out, which sailed wide. Cambridge hit back and on 15 minutes Clive Nattress headed one off the line and Ernie Adams had to be alert to collect the return shot. Cambridge came more into the game and pushed the Quakers back, putting them under severe pressure. A succession of crosses were headed away by Barker, Nattress and Wright as the visitors defence held firm. Then, on 28 minutes, with an equaliser looking likely, Darlington broke out of defence and doubled their lead. It was another defensive blunder by Cambridge that allowed Steve Holbrook time and space in the area to steer the ball past an out of position Vasper for a goal on his debut.

The home side stormed back immediately with two dangerous attacks. Brian Greenhalgh (who’d helped himself to four goals in the previous seasons encounter) headed just over and in the next attack David Lill crashed a shot against the underside of the bar. Incredibly, on 33 minutes, the Quakers broke away again and added a third goal. Holbrook made progress down the right and squared the ball into the box towards Colin Sinclair. Thompson missed his tackle and Sinclair slammed his shot past the helpless keeper.

The second half was almost one way traffic as the Quakers sat back and absorbed the home side’s pressure. Greenhalgh missed a great chance early in the half from close range, which could have changed things but United quickly ran out of ideas against a strong defence in which new signings Nattress and Adams were impressive and new club captain Geoff Barker was outstanding. Terry Eades did put the ball into the Darlington net after 55 minutes but the whistle had already gone for a foul. That was the last moment of concern for the Quakers, who ran out comfortable 3-0 winners in the end. Indeed, they always looked dangerous on the break and could even have added to their lead.

The 3-0 victory turned out to be Darlington’s best result of the season. Things went rapidly downhill after the opening day. Jones lost another of his experienced players in the following week when Billy Horner left to become coach at York City. The young, inexperienced team won only one more away game all season (2-0 at Barnsley in October). Peter Carr was sold to Carlisle for £5000 in November, and Allan Jones was replaced as manager by Ralph Brand in December, as the club slumped to the bottom of the table, a position they remained in for the rest of the season, eventually finishing with 29 points. In 46 league games they’d managed only 7 wins and scored only 42 goals, both statistics their worst ever as a league club. Supporters voted with their feet and the average Feethams attendance was 1697, the lowest in the club’s history. Cambridge recovered from their opening day defeat. It was one of only two home defeats all season and they finished in third place in the table and were promoted to Division 3.

Cambridge produced a 16 page programme, priced at 5p (including Football League Review). It includes very little reference to their visitors. Just a brief introduction and then a list of club records. (Record win, record defeat, most appearances, record transfer fees paid and received etc.) The team line ups were on the centre pages.