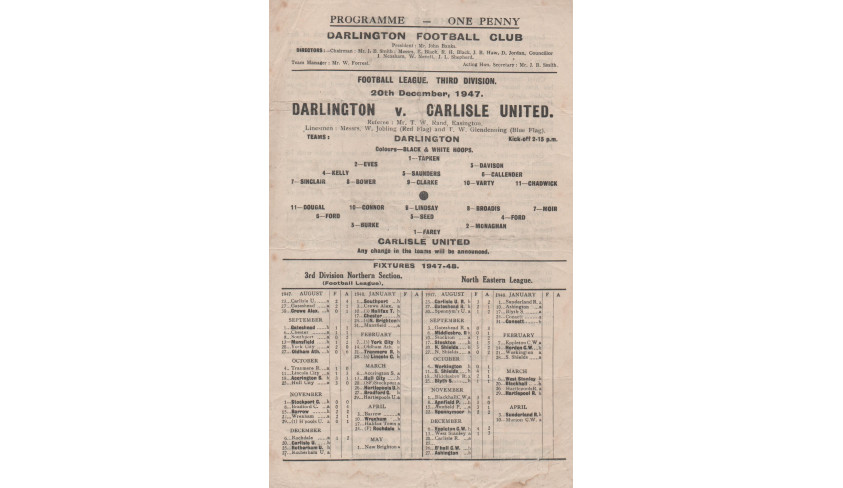 In this week’s Memory Match, Simon Weatherill looks back to the game against Carlisle on 20th December 1947. 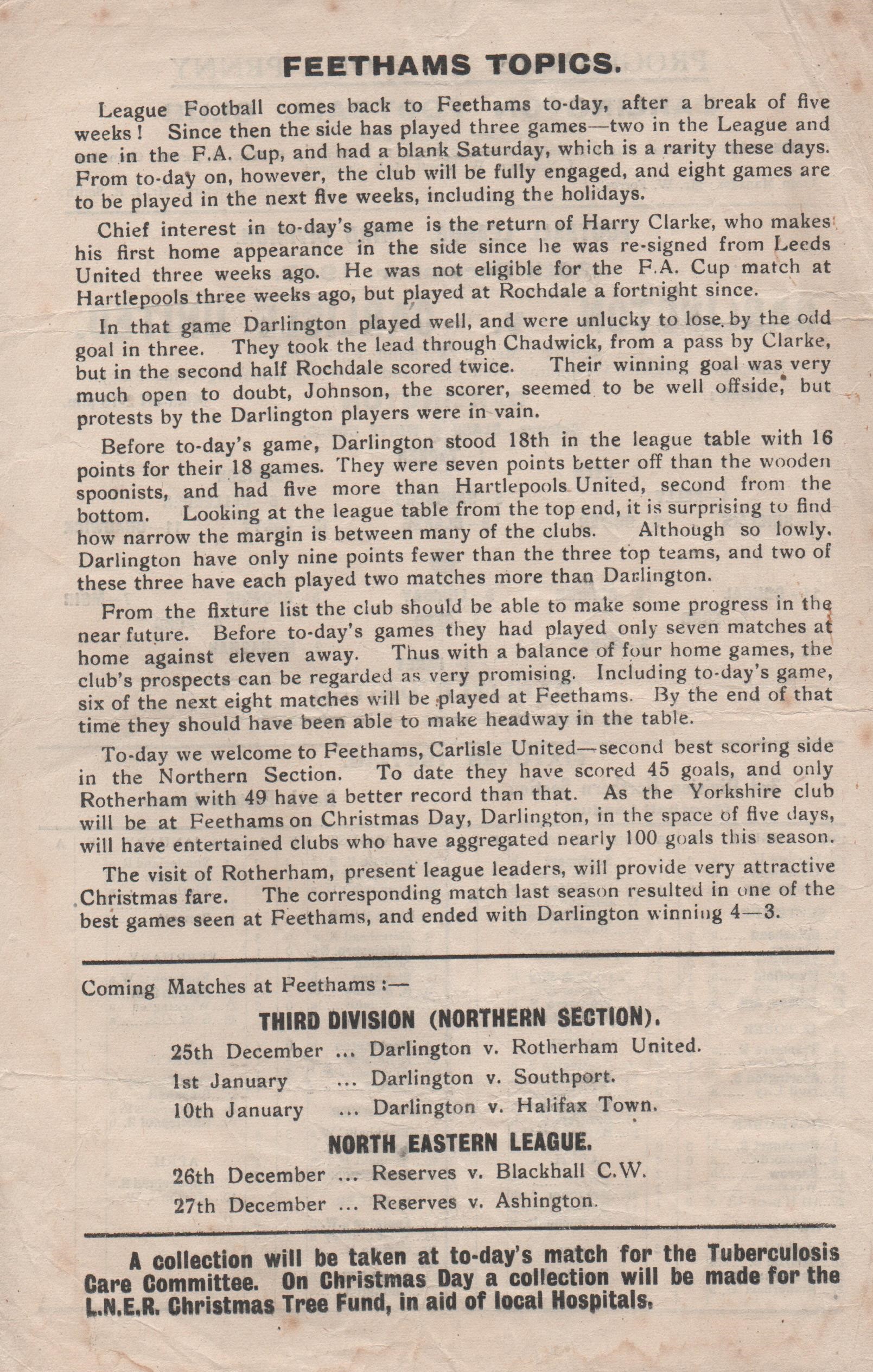 1947/48 was the second season of League Football after the Second World War. Darlington had finished the previous season, 1946/47, in 17th place in the Division 3 North table and were looking to improve. They would have to do so with basically the same squad of players though as manager Bill Forrest only made one significant signing during the summer, bringing in left winger Cliff Chadwick from Hull City. There were still great difficulties in assembling a squad, such as a shortage of housing (the Quakers missed out on two signings who they couldn’t find housing for) and there was still the problem of national service with certain players still being required in the army.

The club made a poor start to the new season with only one win in their first seven games. A lack of goals was holding the team back and manager Forrest tried to address this by bringing centre forward Harry Clarke back to the club from Leeds United. Clarke had been the star striker in the previous campaign, scoring 19 goals in his 21 league and cup games, a run of form that had earned him a £5,000 transfer to Leeds in the previous March. Things hadn’t worked out for him at Elland Road though and he returned to Feethams nine months later.

By the time Carlisle United visited Feethams on December 20th, the Quakers sat in 18th place in the Third Division North table, with 16 points from their 18 games. Their visitors had made a good start to the season and sat in 6th place with 22 points, only three points behind leaders Lincoln City. Carlisle were the second top scorers in the division with 45 goals so far, so would provide a stern test for the Quakers, who were struggling at home. They had played seven home games so far and had only managed one victory. Harry Clarke would be playing his second game since re-signing, his first at home. Making his first appearance of the season at left half would be Norman Callender, who had returned home after serving in the middle east with the forces. He took the place of Wilf Parsley in the only change to the Quakers’ eleven after the previous game, a 2-1 defeat at Rochdale. Carlisle would include Ivor Broadis at inside right. He had been posted to the area after the war and Carlisle had appointed him as player manager at the age of 23, a league record. (In January 1949 Broadis would become the first manager to negotiate his own transfer when he sold himself to Sunderland for £18,000. In a long and successful career, he went on to play for Manchester City and Newcastle before ending his career back at Carlisle. He played 14 times for England, scoring 8 goals.)

The Saturday before Christmas is traditionally recognised as a poor day for attendances, but despite the date and Darlington’s poor home record, a healthy crowd of 7138 were at Feethams for the Carlisle game. They witnessed a keenly contested first half with chances at both ends. The visitors started the game on top and offered the first real threat on goal. Lloyd Iceton played the ball through to centre forward John Lindsay who fired in a terrific shot that smashed goalkeeper Norman Tapken full in the face. The rebound fell to a defender, who cleared.

In their next attack Jack Connor fired across the face of goal but his colleagues failed to get a touch. Darlington hit back and Harry Clarke hit a snap shot which United keeper David Jones saved well at full length. Tapken did well to keep out a Jim Dougal drive and then Ivor Broadis fired well wide of the mark as the visitors continued to threaten. The Quakers got stronger as the half drew to a close and deservedly took the lead in the 40th minute. Cliff Chadwick crossed from the left and found Clarke beyond the far post. He cleverly turned and fired home from an acute angle. The visitors were level within a minute. Lindsay collected the ball in a seemingly offside position, advanced and crashed his shot past Tapken. The home defenders surrounded the referee in protest, but after consulting his linesman, he allowed the goal to stand. Half time: Darlington 1 Carlisle Utd 1.

The second half began with the visitors on top. Home keeper Tapken saved brilliantly from Lindsay but couldn’t hold the ball and Broadis fired wide from the rebound. The early pressure told and United grabbed the lead in the 55th minute. An almighty goalmouth scramble ended with Dougal heading into the net from close range. Darlington fought back and went close to an equaliser when Chadwick put in a shot which beat the keeper but left back Richard Burke got back to clear off the line. The visitors seemed to make the game safe when they broke away and added a third goal in the 72nd minute. Broadis slid the ball through to Lindsay who held off Jack Saunders and went through to score. Darlington piled on the pressure and gave themselves a chance of getting something out of the game when they pulled a goal back on 85 minutes. A corner led to a goalmouth scramble and Ken Bower forced the ball home.

The Quakers kept up the pressure and two minutes later they forced an equaliser. John Eves played a free kick into the Carlisle penalty area and after the ball bobbled about in the goalmouth, Bob Sinclair headed into the net. The home side weren’t satisfied with a point and went looking for a winner. They found it with an almost carbon copy of their second goal. A corner led to a goalmouth scramble and again Bower was there to force the ball over the line.

Three goals in three and a half minutes had turned what looked like another home defeat into an unlikely 4-3 victory. A lot of the crowd had missed the sensational finish as many had left the ground with their team 3-1 down with five minutes left. The win lifted the Quakers five places in the table, up to 13th. They eventually finished the season in 16th place with 39 points from their 42 games, one place higher and three points better off than the previous year. Harry Clarke finished as top scorer with 14 goals from his 22 games.

The programme for the 1947/48 season was a very simple single sheet (hardly surprising considering post war shortages) costing one penny. The front showed the team line-ups and fixtures and results for first and reserve teams. The back had Feethams Topics, with what was happening around the club, and a note of forthcoming fixtures.