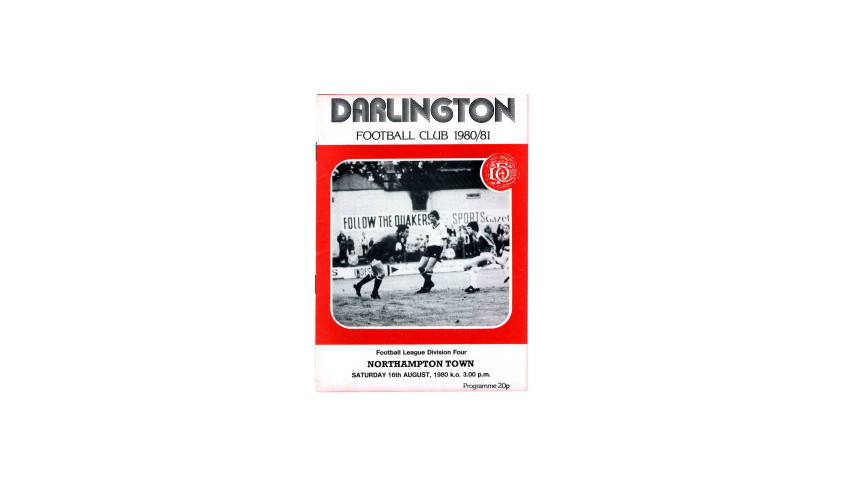 A trip down memory lane with Simon Weatherill

In the latest of our Memory Match series, we go back to the home game against Northampton Town on August 16th 1980.

The first game of a brand new season is always a time of great optimism. Everyone starting on zero points and feeling that this year could be their year. 1980/81 was no exception for Darlo.

The Quakers had been busy during the summer. The previous season had finished with yet another application for re-election. We had been safely re-elected, along with Hereford, Crewe and Rochdale. (Although Rochdale had survived by the skin of their teeth, beating Altrincham by only one vote.) Manager Billy Elliott reacted by releasing eleven players and vowing that from now on, Darlington would rely on a much smaller, younger playing staff. Clive Nattress, Jimmy Cochrane, Derek Craig, Dave Crosson, Ron Ferguson, Phil Owers, John Peachey, Phil Taylor, Peter Bainbridge, Bryan Kent and Keith Coleman were all released. Elliott also scrapped the reserve team and replaced it with a new youth team under the stewardship of former Sunderland defender Ritchie Pitt. The team (which included Fred Barber and Brian Honour) would compete in the Northern Intermediate League.

Only four new signings were made before the season kicked off. Goalkeeper Pat Cuff was signed from Millwall, defenders Alan Kamara and Peter Skipper came from York and Hull respectively, and midfielder David Speedie from Barnsley. All four of them made their league debuts for the club in the opening day fixture against Northampton. Only Cuff and Harry Charlton were over the age of 24 in a very young, inexperienced side, which was captained by Donald Ball, at 18, the youngest captain in the Football League.

In the Feethams sunshine, Darlington won the game 1-0 with a John Stalker goal just before half time, in front of 1763 fans. It was the start of what was to be a much better season for the Quakers, eventually finishing in 8th place, with 49 points. (2 points for a win in those days, don’t forget.) The much improved league position was due in no small part to our potent strike force of Alan Walsh and John Stalker, who managed 40 goals between them throughout the season, Walsh with 23 and Stalker with 17.

Attendances hovered around the 2000 mark for much of the season, but ended with an average of 2537, due mainly to 7155 for the derby game with Pools, and several better crowds when we experimented with Sunday football. We were actually the first club in the country to try Sunday football, and had to have it specially sanctioned at a Football League meeting. It was in an attempt to avoid fixture clashes with Middlesbrough, Sunderland and Newcastle and so improve attendances. It seemed to work as well. 5932 turned out for the first Sunday fixture against Mansfield, followed by 3491 v Hereford and 3631 v Torquay. So the Quakers were pioneers in introducing Sunday football to the nation, long before Sky had even been thought of!! Adult admission to Feethams was £1.20 in the 1980/81 season, although charging admission wasn’t allowed on a Sunday, so the club charged £1.20 for a team sheet, which automatically gained you entrance to the ground.

The programme for the 1980/81 season consisted of 16 pages, with minimal advertising and some interesting features. It was printed by Parkgate Press in Borough Road and cost 20p for the first half of the season, later rising to 25p. Regular features were Billy Elliott’s column, club secretary’s notes by Dave Thorne, two pages introducing our visitors, a profile page on a different player each week, numerous photos from previous games, results and statistics for the first and youth teams and the team line-ups. Frank Tweddle also wrote a column about previous encounters with our opponents and a review of what was happening elsewhere in Division Four. He also contributed a very interesting occasional item entitled Looking Back, covering a piece of Darlington history.