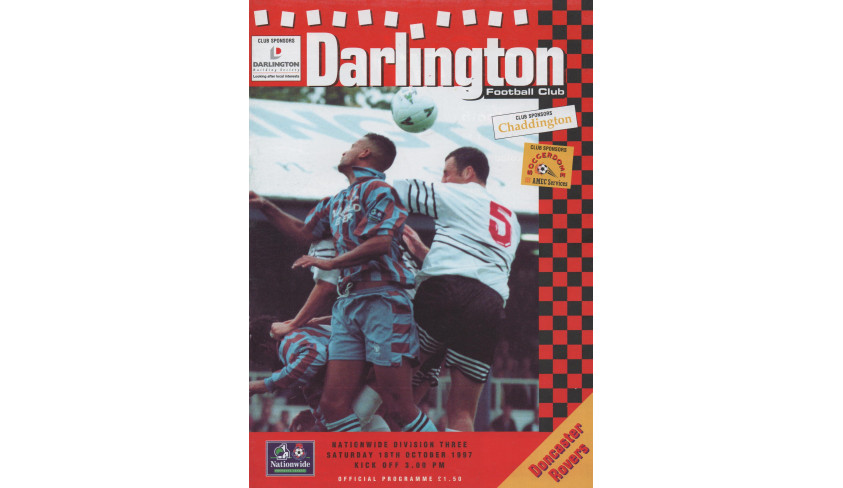 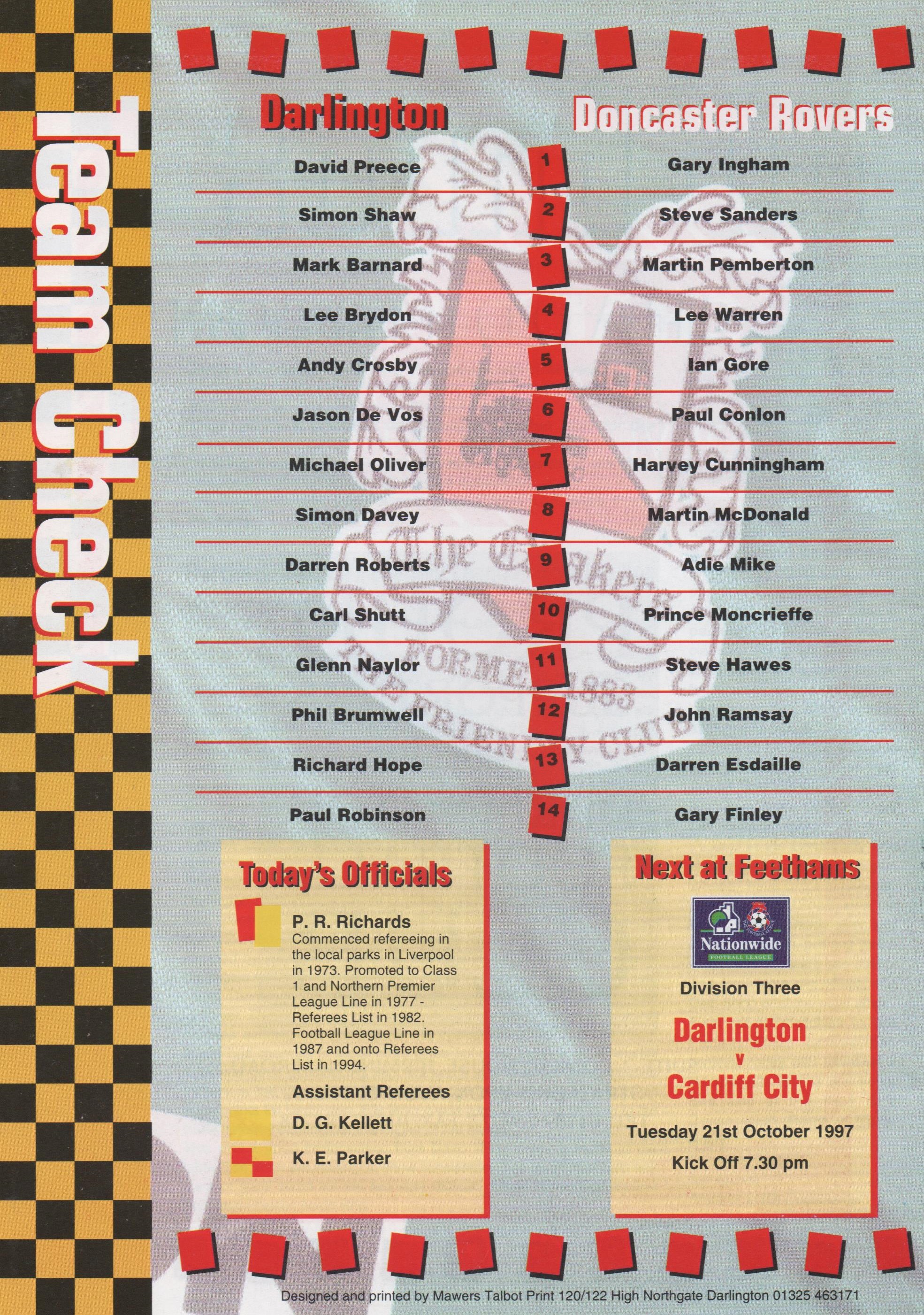 In this week’s Memory Match, we look back to the 5-1 home win over Doncaster Rovers on 18th October 1997.

The 1997/98 season kicked off with David Hodgson in his second spell as Darlington manager. He’d rejoined the club in the previous November, taking over from the sacked Jim Platt. He spent the summer reshaping the squad that had finished in a disappointing 18th place in the previous season’s Division 3 table. Paul Newell, Gary Twynham and Anthony Carss were amongst those that left the club and new signings included goalkeeper David Preece from Sunderland, striker Lee Turnbull from Scunthorpe, full back Alan Gray from Bishop Auckland and two players who flew in from Canada. Goalkeeper Lucas Papaconstantinou and full back Willie Guimarra joined Jason De Vos to bring the Canadian contingent at the club up to three.

The team made an awful start to the season and won only one of their first eleven games, and that was only secured with two very late Glenn Naylor goals in a 3-2 win over Swansea. By the time Doncaster Rovers visited Feethams on 18 October the Quakers sat second from bottom in the Division 3 table with eight points from eleven games. The only team below them were Rovers, who had yet to win a game and only had four points to their name. Hodgson had strengthened his squad a month earlier with the loan signing of Simon Davey from Preston North End. He further strengthened in the run up to the Doncaster game with the signing of two Austrian internationals. Striker Mario Dorner and defender Franz Resch had been released by Motherwell after short contracts and Hodgson wasted no time at all in snapping them both up. Resch had 5 full international caps, while Dorner had 14 under 21 caps. Lee Brydon, Alan Gray, Lee Turnbull and Michael Oliver would all miss the Doncaster game, but there was better news on the injury front as Brian Atkinson returned after recovering from an eye injury that had caused him to miss the last five games. Atkinson had to settle for a place on the bench next to new signing Dorner.

A crowd of 2451 turned out at a three sided Feethams (the East Stand was closed prior to demolition) for the vital six pointer between the bottom two sides in the division. They saw the Quakers make a bright start and dominate the early play but struggle to turn their superiority into goals. In the very first minute Mark Barnard fired in a shot from 25 yards that Rovers keeper Dean Williams superbly tipped over the bar. Williams was at full stretch again after 11 minutes to make a similar save, this time from Darren Roberts. Simon Davey headed home a Carl Shutt cross but saw it disallowed due to some pushing in the box, before Davey and Shutt both tested the keeper with good shots. The goal that Darlington had been threatening finally arrived in the 43rd minute when Glenn Naylor slotted home from close range after a Roberts shot had been blocked and fallen invitingly at his feet. The hard earned lead lasted only two minutes though as Rovers equalised with the last attack of the half. A long ball forward was flicked on by Adie Mike into the path of Prince Moncrieffe, who ran through a static home defence and tucked the ball past David Preece. Half time: Quakers 1 Donny 1.

The second half was only five minutes old when Darlington regained the lead. A Davey corner headed powerfully home by Jason De Vos from six yards out. Twenty minutes later the home side added a third with a carbon copy of their second. A Davey corner headed home by De Vos from almost exactly the same spot. The game was over as a contest three minutes later when Rovers were reduced to ten men after a shocking high tackle in the middle of the park by Harvey Cunningham on Kenny Lowe that resulted in a 20 man brawl. The Quakers were now in complete control and went looking for more goals. Simon Shaw rattled the bar from 10 yards out, Lowe dribbled his way past three defenders and shot into the keeper’s hands and Shaw had a goal disallowed for offside. The fourth goal eventually arrived on 85 minutes from another corner. De Vos and Richard Hope challenged keeper Williams to the high ball at the far post and as the ball dropped loose in the area De Vos hooked it back over his shoulder across the face of goal where Shutt headed home his first goal of the season. Darlington completed the scoring in the final minute when substitute Brian Atkinson found space in the box and squared the ball to an unmarked Shaw, who calmly passed the ball into the net from 6 yards out.

The 5-1 win lifted the Quakers four places in the table but failed to kick start their season and they struggled along at the wrong end of the division for the whole campaign. They registered only one away win, 2-0 at Doncaster in the return fixture in February, and collected only 9 points on their travels – their worst return for over 40 years – and they finished in 19th place with 54 points. There were five teams that finished below the Quakers in the table. Doncaster were suffering a severe financial, owner induced crisis and finished bottom, and were relegated to the Conference. They had only 4 wins all season and finished with 20 points. The other four teams below Darlington make for interesting reading. Just over 20 years ago, and four of the bottom five places in the Football League were occupied by Swansea, Cardiff, Hull and Brighton, all of whom have played Premier League football in the intervening years.

The programme for the 1997/98 season consisted of 32 pages and cost £1.50. Full colour throughout, the front cover was a photo from a previous game. Inside were columns by manager David Hodgson and chairman Bernard Lowery, News Desk, Journalists View, Division 3 Review, two pages on today’s opponents, a page of current season statistics, action photos from a previous game, Encounters (a look at previous matches with the visitors by Frank Tweddle), In The Spotlight (featuring one of the first team squad), Team News (injuries, suspensions etc), a supporters club page, results and line-ups for the current season and the team line-ups on the back cover.