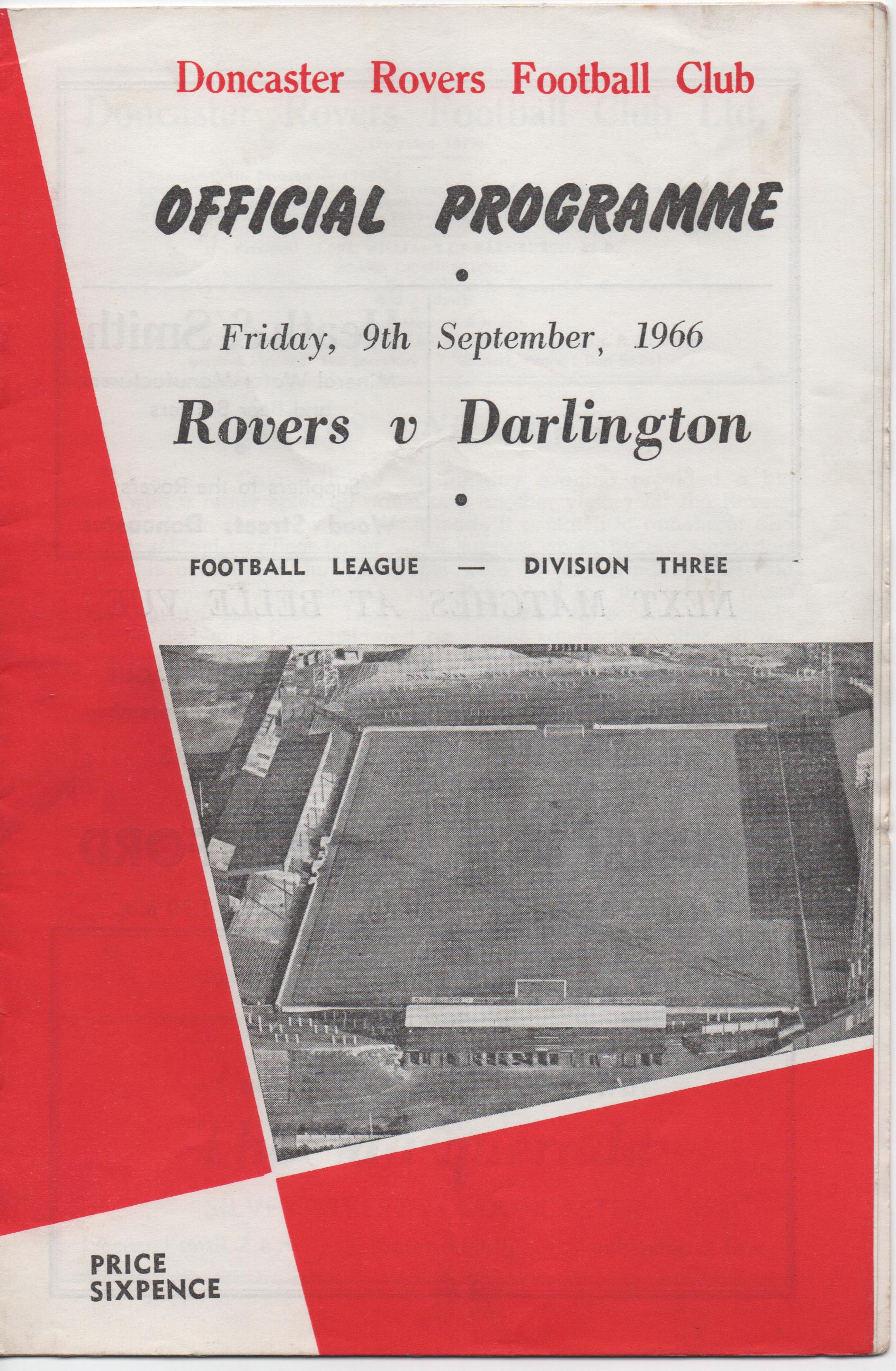 Simon Weatherill continues his Memory Match series with the 4-0 away win at Doncaster Rovers on 9th September 1966.

May 21st 1966 was a red letter day for fans of Darlington FC. The Quakers won promotion for only the second time in their history and would kick off the 1966/67 season in Division 3. Manager Lol Morgan had left the club to join Norwich in the summer and been replaced by Jimmy Greenhalgh. The new manager kept the previous season’s successful squad intact and there were high hopes that they could consolidate their position in the higher league.

The team began the 66/67 season with two wins (over Watford and Swansea) and two defeats (to Swindon and Reading) that placed them solidly in mid table. The fifth game, on September 9, would be away to Doncaster Rovers. The Quakers and Rovers had finished as the top two teams in Division 4 in the previous season, Rovers clinching the championship with a slightly better goal average. The two games between the clubs had been played at Easter and had been both high scoring and well attended. The Quakers had won 3-2 at Feethams in front of 12,181, then the following day at Belle Vue, Rovers had gained revenge 6-3 in front of a crowd of 15,572. In fact, Darlington had a point to prove at Belle Vue as their last three visits there had resulted in 22 goals conceded. (3-6, 3-6 and 0-10).

Rovers had started the season with two home wins and two away draws and sat second in the table, so would provide another tough test. Their club had been thrown into turmoil though two weeks previously when a serious car crash involved two of their players. Centre half and captain John Nicholson was killed in the accident and centre forward Alick Jeffrey was hospitalised with serious injuries that would keep him out of the side for about half the season. The Quakers named an unchanged side for the fourth game in a row after Ray Yeoman and Alan Sproates passed late fitness tests.

An impressive crowd of 14,207 was at Belle Vue for the Friday night fixture. Both sides showed their attacking intentions early on as they fought to gain the upper hand. Rovers left winger Bobby Gilfillan gave visiting full back John Peverell a torrid time in the opening few minutes, while at the other end Quakers’ centre forward Bobby Cummings had started well and was giving home centre half John Wylie an uncomfortable time. It was the Quakers who took the lead in the 8th minute. Wylie twice missed opportunities to clear the ball from his own area and Cummings pounced on the loose ball and gleefully slammed home. It was the first time that Rovers had found themselves behind in a match and they worked hard to try and find an equaliser. They enjoyed a lot of possession but found the Darlington defence in an uncompromising mood. Captain Ron Greener and his defensive partner Joe Jacques were in great form and dealt with everything that Rovers could throw at them.

The Quakers always looked dangerous on the break with Ray Yeoman, Alan Sproates and Don Ratcliffe prompting play from the midfield and George McGeachie and Les O’Neill always menacing on the wings. Their fast, accurate counter attacking brought them a second goal on 38 minutes. Ratcliffe made the initial burst forward and played in McGeachie, who supplied the cross towards Cummings. The centre forward controlled the ball, then sent Wylie the wrong way with a neat back heel and swivel before crashing the ball home past the helpless Rovers keeper Robert Dawson. Half time: Donny 0 Darlo 2.

The second half began with Rovers well on top and pushing to get back into the game. The Quakers defence held firm, although there was the occasional wobble as Gilfillan threatened to get the better of Peverell again. A goal from the home side in this spell may have changed the whole game, but it never came and the Quakers continued to look dangerous on the break. Cummings completed his hat trick on 72 minutes, finishing off a move that had swept the Quakers the full length of the pitch. A goal kick by Tony Moor found Sproates in midfield. He played the ball to Ratcliffe who beat two men and then switched the play out to the right to McGeachie, who fired in a low cross to the near post. Cummings beat Wylie to the ball, then turned and fired an unstoppable shot into the net from an acute angle. Rovers were a beaten side and Darlington controlled the remainder of the game, although they were threatened once when John Flowers hit a superb drive that was well saved by Moor. The fourth goal was the result of more brilliant play by Ratcliffe. He ran 40 yards with the ball before squaring it to O’Neill in the inside right position. The winger ran onto the ball and crashed a first time drive past Dawson to complete a comprehensive victory for the Quakers. Full time: Doncaster 0 Darlington 4.

The win lifted the Quakers above Doncaster and into 9th place in the table. Mixed results followed, so that with 19 games gone, they sat just two points below mid table, and actually two points ahead of Middlesbrough, but serious injuries to three key players changed the course of the season. Left winger Les O’Neill broke a bone in his ankle in a game at Swansea at the end of September and missed three months of the season. Then, two games later, centre forward Bobby Cummings broke his leg at Bristol Rovers and missed nearly six months, only returning for the last four games of the season. Cummings had been the top scorer in the promotion season and had made a good start to the new campaign. Of the team’s first nine league goals scored in 66/67, Cummings had contributed seven. The absence of his goals would prove to be a massive loss to the team. Then in October right winger George McGeachie injured his knee in a home game with Gillingham, an injury so severe that it finished his career. The team continued to hover just below half way in the table, but a run of six straight defeats in December dropped them into the bottom four relegation places. They never really recovered from that and eventually finished third from bottom and were relegated along with Swansea, Doncaster and Workington. The club’s journey into Division 3 had lasted only one season. 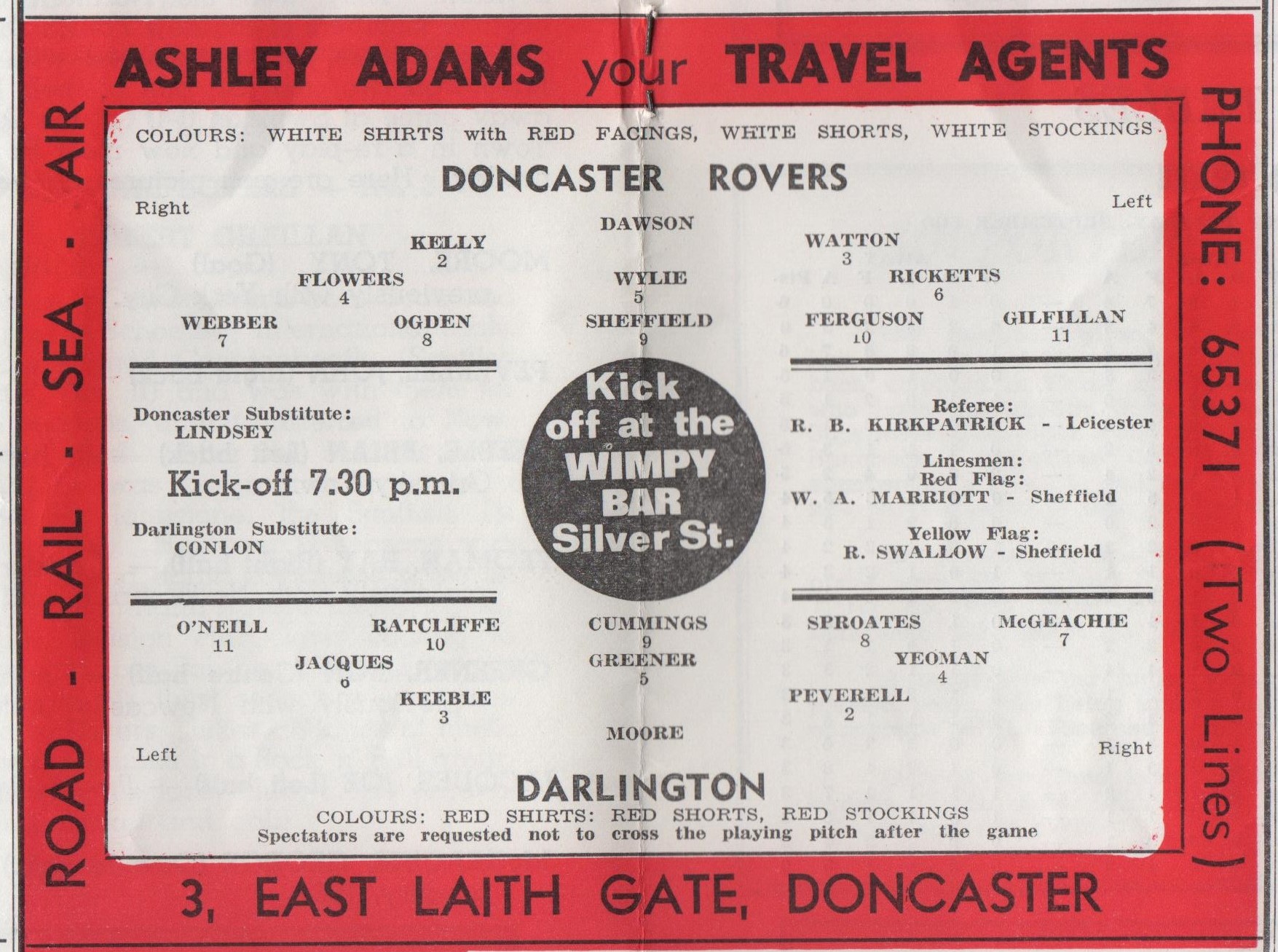 Doncaster produced a 12 page programme, priced at 6d. It included a single page on their visitors, with a short club history and brief pen pictures of the Darlington players. The team line-ups were on the centre pages.