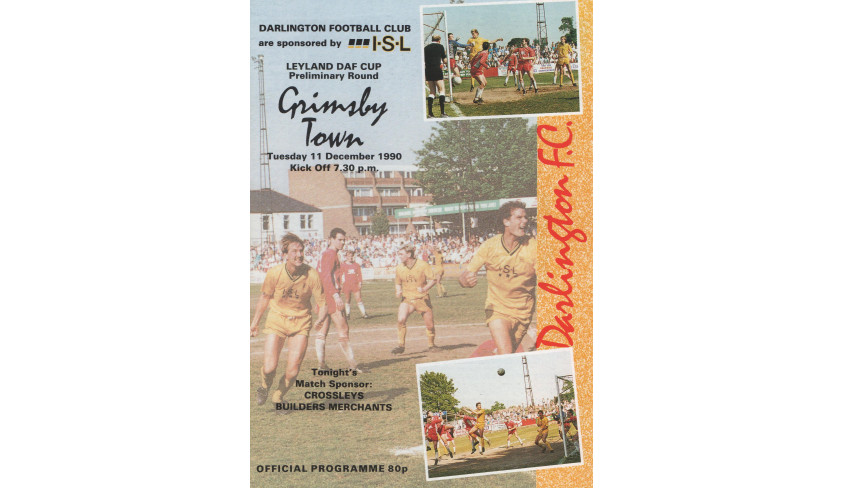 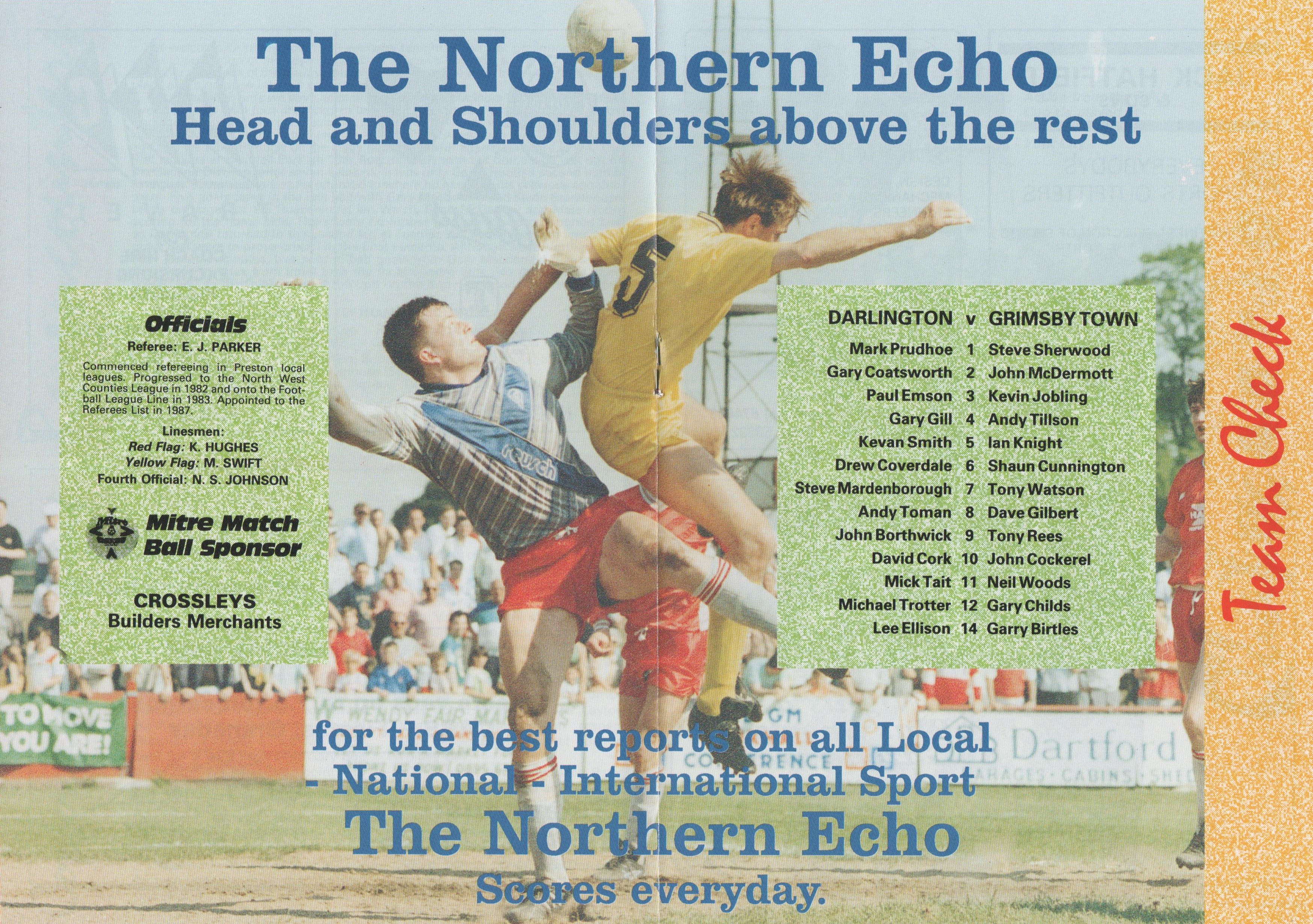 In his latest Memory Match, Simon Weatherill recalls the Leyland Daf Trophy game against Grimsby on 11th December 1990. It was remembered for more than just the score.....

The Associate Members Cup, competed for by clubs in the bottom two divisions of the Football League, was introduced to the football calendar in the 1983/84 season. It offered lower league clubs a genuine chance of playing in a Wembley final. The early rounds always struggled to generate decent crowds, with fans only really taking an interest in the later rounds as a possible trip to Wembley grew near. The competition has had several sponsors over the years (Freight Rover, Sherpa Van and Autoglass to name a few) and constantly changes format in an attempt to generate more interest.

The format for the 1990/91 season (sponsored by Leyland DAF) saw the clubs drawn into groups of three for the preliminary round. Darlington were drawn to play York City and Grimsby Town, with the top two to qualify for the next round. York won 3-1 at Blundell Park and then followed that up with a 3-2 win over the Quakers at Bootham Crescent, meaning that they won the group. Darlington would be at home to Grimsby on 11th December to decide second place, needing only a draw to progress because of their slightly better result against York.

It promised to be a difficult encounter. Darlington had started the season strongly and after the first 13 games they found themselves in second place in the Division Four table, but their form stuttered during November and by the time of the Grimsby cup tie they had dropped to sixth place with 27 points from 17 games. Grimsby were flying high in Division Three and sat in second place with 37 points from their 17 games.

Darlington had been operating with a small squad and several injuries meant that manager Brian Little had selection problems. Regulars David Corner, Les McJannet and John Borthwick would all miss the game. Gary Coatsworth and David Geddis would deputise for McJannet and Borthwick, and the one piece of good news on the injury front saw the return to action of central defender Jimmy Willis, who would be making his comeback appearance after breaking his leg at Telford eight months earlier.

As was usual in the early rounds of the competition the attendance struggled to break the thousand mark, only 1106 turning out at Feethams for the game. They saw the visitors make a strong start and take the lead after only three minutes, with a mistake by Quakers’ skipper Kevan Smith. He attempted a back pass to Mark Prudhoe but left it woefully short and it was seized upon by Tommy Watson, who squared the ball for Neil Woods to pass into the net, despite a desperate lunge by Mick Tait who had got back onto the line but couldn’t quite reach the ball. The Quakers hit back and David Geddis had their first attempt at goal with a clever turn and first time shot but Grimsby keeper Steve Sherwood saved comfortably. The visitors nearly added a second goal in the 34th minute when Woods raced clear of the Darlington offside trap and lobbed the onrushing Prudhoe. He was slightly off target though and his shot hit the base of the post.

The Quakers were struggling to get into the game but everything changed in the 35th minute with one of the most bizarre incidents ever witnessed at Feethams. Grimsby were attacking and had a throw-in in the final third. Tommy Watson threw the ball towards Tony Rees and the ball ran out harmlessly for a goal kick. Then the argument started! Watson obviously thought Rees had mis-controlled the ball. Rees thought it was a rubbish throw-in. Whoever was at fault, the two players went for each other. The linesman and Frank Gray stepped in to try and separate the two players and punches were thrown. When the referee Jim Parker arrived on the scene the argument continued and both players were shown red cards for foul and abusive language. As they left the field, they went for each other again and had to be separated by the Grimsby coaching staff sitting on the bench. From 1-0 in front and controlling the game, one moment of madness meant that Grimsby would have to play 55 minutes with nine men. Half time: Darlington 0 Grimsby Town 1.

Predictably, the second half began with Darlington well on top, but it took until the 67th minute for them to find an equaliser. Jimmy Willis collected the ball out wide on the right and chipped a pass into the box which found Andy Toman with his back to goal. He chested the ball down, swivelled and crashed the ball home from 10 yards out.

Six minutes later Toman added his second. A cross from the right by Gary Gill found his fellow midfielder, who controlled the ball on his chest then volleyed home just inside the near post. In a rare attack the visitors nearly equalised, but Prudhoe pulled off an acrobatic save to keep out Mark Lever. The Quakers returned to the attack and Toman went close again when his shot grazed the crossbar before he completed his hat trick in the 78th minute. Drew Coverdale fired in a low cross from the left which Geddis just failed to connect with. The ball ran out wide on the right and was returned by Gary Coatsworth to Toman who swept home to complete an 11 minute hat trick, his first treble for the club.

Darlington’s reward for the 3-1 win was an away tie at Preston in the next round. On a freezing cold, windswept night on the Deepdale plastic they were beaten 2-1 after extra time and so exited the competition.

Referee Jim Parker managed to go one better the next time he visited Feethams. In an FA Cup tie against Chesterfield in the following November, Parker sent off three Chesterfield players as their side were beaten 2-1.

Fans of Darlington and Grimsby were both celebrating promotion by the end of the 1990/91 season. The Quakers finished as Champions of Division Four, and Grimsby finished in third place in Division Three.

The programme for the 90/91 season consisted of 24 pages and cost 80p. The front cover featured action shots from the previous seasons championship clincher at Welling. Inside were all the usual match day articles – Managers Notes, two pages on the opposing team, Captains Corner, View from the Press Box, Yesteryear (with a previous game on this day in the past), supporters club notes, previous encounters with today’s opponents, action photos, reserves and juniors news, Fourfax (with news of what was happening elsewhere in the division), match facts and figures and of course the team line-ups on the centre pages.