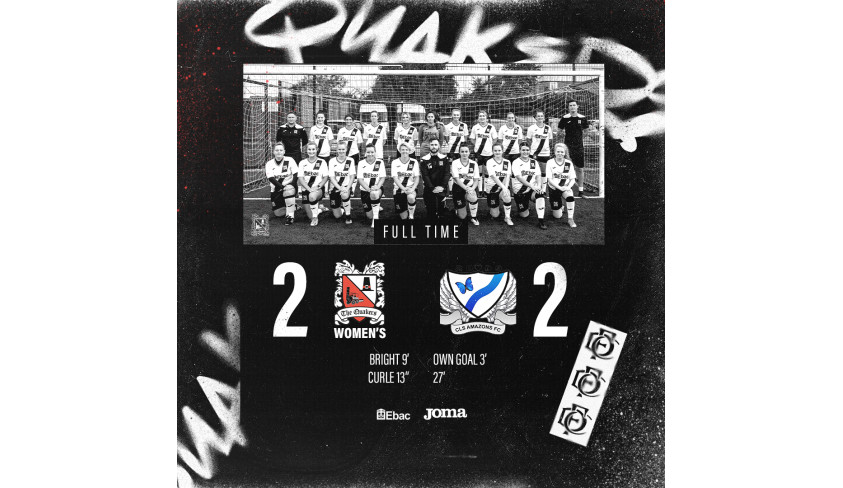 Great start to the season

Darlington Women are now unbeaten in six league and FA Cup matches following a 2-2 draw with Chester-le-Street Amazons on Saturday.

It could so easily have been a victory though, as Quakers hit the woodwork on three occasions during the game in front of a crowd of 102.

Manager Shaun MacKenzie said; “It was a decent performance, and we were a little bit unlucky not to get all three points.

“We need to turn our draws into wins, so maybe we need a bit more attacking threat. We could so easily have won games instead of drawn them, because we’ve been the better team.

“We’ll take our positives into the next game.”

After the high of progressing to the next round of the FA Cup last week, spirits came crashing down early on, conceding within the first three minutes. The game was still in its infancy when Amazons managed to get a ball though the Darlington defence and as keeper Martina Cuccunato came to smother the ball it deflected across the box to hit the unfortunate Alice Wearmouth and the ball bounced into the Darlington net to put Amazons ahead.

The shock of the early goal awoke Darlington and their first chance came with a ball from Whitworth over the top of the defence to Chloe Bright who shot just wide.
A few minutes later, the game was levelled as a good ball from Aimee Dagnall was played through to Bright who managed to lift her shot just over the keeper for Darlington’s first goal.

Darlington kept up the pressure and were rewarded after 13 minutes, when Sophie Curle picked the ball up the left hand side and she managed to delightfully lob the keeper to put Darlington into the lead, 2-1.

The game became more balanced with neither team getting into a rhythm.
After 26 minutes the Amazons had some good build up down the left hand side and as it was played into the box Cuccunato came out to claim but a fortunate bounce into the chest of the Amazons attacker allowed her to get round the keeper and finish well into the Darlington goal.

The game continued to be a tight affair and both teams battled with not many clear cut chances for either team. Amazons managed to get onto another pass in the danger area but Cuccunato managed to bravely come and collect it the ball.

The second half started how the first ended, with both teams battling for the ball but unable to develop any fluidity in the play with Amazons starting the brighter of the teams. Darlington were limited to difficult strikes from outside of the box and Amazons defended well, blocking every shot released. The closest either team came to scoring in the second half came when a free kick was awarded to Darlington. Curle struck the ball over the wall but it rattled the woodwork, the follow up was then played across the box only for Chloe Bright to strike against the crossbar.

The game continued in the same vein after the free kick with neither side creating many clear opportunities. But Darlington coming close again, only to be denied by the crossbar for a third opportunity.

Darlington pick up a point and maintain their unbeaten run but with the talent in the squad, they will be disappointed not to get a win and will be looking for a stronger performance in their next match against Boldon.

Player of the match: Emma Doudican