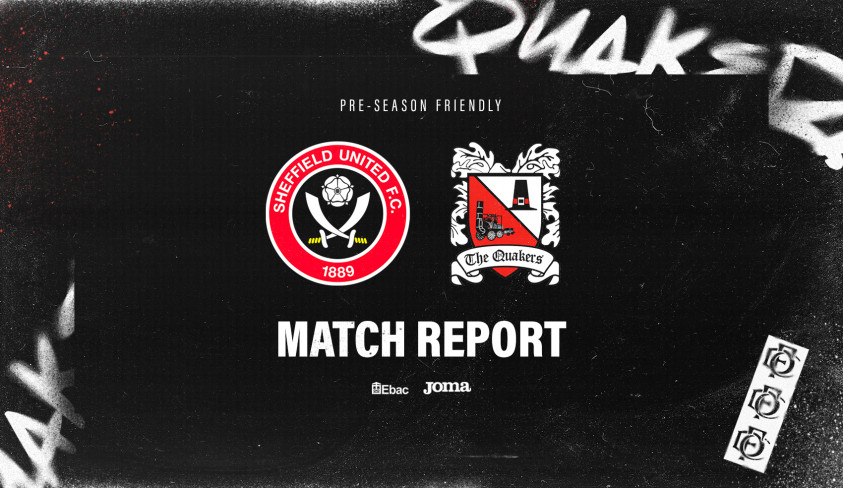 Behind closed doors at Sheffield United

*Quakers were invited to play behind closed doors at Sheffield United's training ground against their Under 23 side. United requested that there should be no pre match publicity of the game, which was agreed to.

Quakers were hit by players obliged to self-isolate with Covid or pinged, so some of the Academy lads were called up.

Alex Purver -- (midfielder playing as an emergency centre half)

Quakers were very pleased with their first friendly of pre-season at Sheffield United's training ground.

Considering that patched up Quakers played two full time United teams -- they made 11 subs at half time -- they did very well under the circumstances, and there were some very good performances.

New keeper Tommy Taylor tipped a header from a corner over the bar in the opening minutes, but Quakers nearly took the lead on 15 minutes when Cole Kiernan ran though, with just the keeper to beat, but lifted the ball marginally wide.

Quakers were awarded a penalty on 15 minutes when Kiernan was brought down after another run, but skipper for the day Joe Wheatley dragged the spot kick wide of the left hand post.

United were awarded a penalty themselves two minutes later for a foul, but Taylor guessed correctly, dived to his right and beat the spot kick away.

Kevin Dos Santos caused plenty of problems on the left hand side with his pace, and after one good run, curled a right foot effort inches wide of the post.

But Quakers went a goal down on 24 minutes, when a United striker cleverly chipped the ball over Taylor from 30 yards out.

Quakers tried to hit back, and Dos Santos jinked past three players but his shot was blocked.

The visitors deservedly levelled just on half time. Alex Purver, playing as an emergency centre half, found Joey Hope on the left, and he got to the byeline where he pulled the ball back for Tyrone O’Neill to fire past the keeper.

It was nearly 2-1 to Quakers just after half time when Hope made a good run from left back into the penalty area, but Rhys Armstrong fired just over the top.

United went back in front on 55 minutes when their player broke away and beat second half keeper Lucas Martin.

But we levelled again on 61 minutes when Luke Charman, who had just come on as sub, set up Dos Santos who fired across the keeper into the bottom corner of the net.

Despite being up against full time players, Quakers kept plugging away and the game was evenly balanced until the 77th minute when United fired the winner from close range.

However, Kiernan nearly levelled in the dying minutes with a glancing header from a Ben Hedley cross that went just wide.