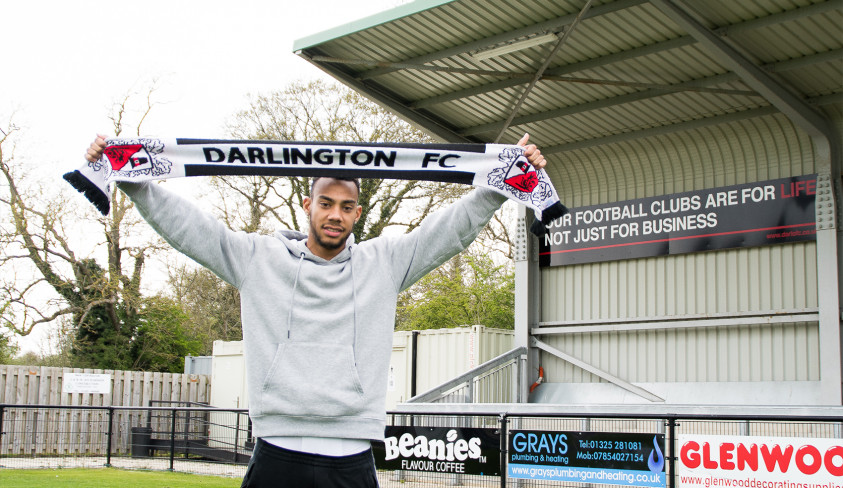 Following talks with AFC Fylde, we have today agreed in principle to sign striker Junior Mondal at the end of his current contract.

Junior, who is 24, started his career in the youth set up at Middlesbrough where he won a domestic treble of trophies in 2015, before moving on to Whitby in the EvoStik League in 2017.

Junior was a big hit at Whitby with his pace which helped him score eight goals, and he was transferred to Forest Green Rovers (then managed by former Darlington boss Mark Cooper) in January 2019.

He made 41 appearances for Forest Green, scoring five times – two of his appearances were against Tranmere in the League Two play off semi final in 2019. He was released by Forest Green in the summer of 2020, when he signed for AFC Fylde.

Manager Alun Armstrong said; “I know Junior, who can play anywhere in a front three, from my Middlesbrough days. I was surprised when he was released by Boro, he lost his way a little bit, but then he went to Whitby where he scored a few goals and was watched by several Football League clubs.

“Everyone was massively surprised when Forest Green released him, and I was close to signing him last year but he went full time with Fylde.

“He still has aspirations of playing again in the Football League because he wants to prove people wrong - -and we’ll help him as much as we can.”

We would like to welcome Junior to the club, and wish him all the best during his stay with us, and also AFC Fylde with their help in his signing.

You can contribute to Boost the Budget here:
https://fundraising.darlingtonfcsupportersgroup.org/pitches/boost-the-budget-21-22
< Back News Home Next >