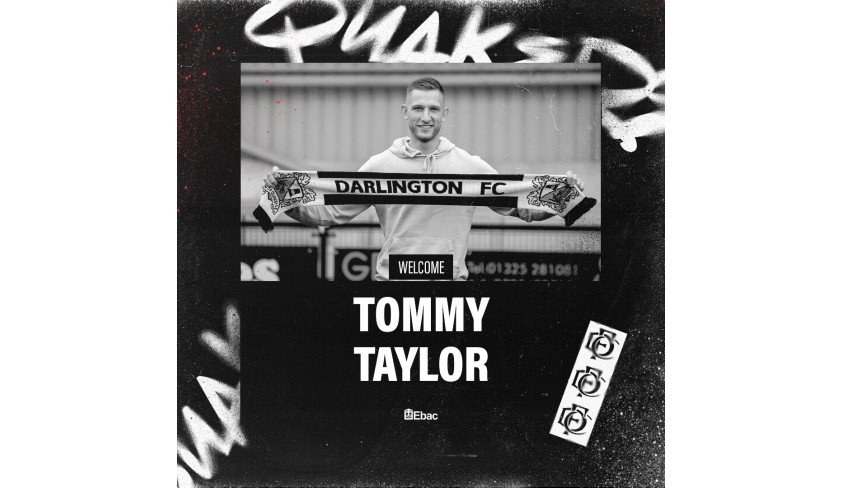 Tommy, 28, played in the youth teams at Sheffield Wednesday, before he joined Brighouse in 2011.  As well as putting in some very good performances for Brighouse, he also scored a last minute header for them in a Northern Counties East League game. He had a brief spell at Halifax Town in 2013, and then he moved on to Farsley for two seasons, where he won the EvoStik First Division North player of the year award.

He moved back to Brighouse for a second spell, before spending three seasons at Scarborough Athletic (one of his team mates was former Darlington captain Kevin Burgess) helping them win promotion from the EvoStik First Division North.  He also had trials during this time at Rotherham and Cambridge, while other Football League clubs kept an eye on him.

In the summer of 2020, he signed for another Northern Premier League club, Buxton, and played for them until the season was curtailed.

Darlington manager Alun Armstrong said; “Tommy wants to play at a higher level than what he’s been playing at in recent years, and we’re happy to give him that opportunity.

“He’s got plenty of experience, has a big presence, and is a real character. We have needed a voice at the back, and he will provide it.

“Scarborough speak really highly of him, and his agent believes that he is one of the best non league keepers in the country. I have been given other good reports.”

Everyone at Darlington FC would like to welcome Tommy to the club, and wish him every success during his stay with us.

You can watch an interview with Tommy here:

Do you want to contribute to Boost the Budget for season 2021-22? Follow this link: