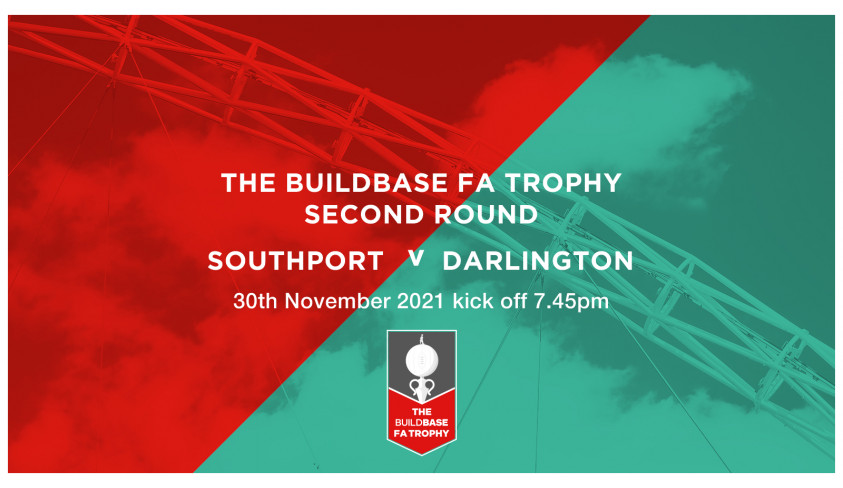 Luke scores his ninth of the season in normal time

Quakers went out of the FA Trophy in a penalty shootout at Haig Avenue tonight.

Quakers played much better than on their league visit a few weeks previous, but they couldn't make their chances count when they were on top in the game.

And it was Southport who kept their cool in the shootout, converting all five of their penalties, with Ben Hedley being unlucky enough to miss with his.

Quakers created a chance in the second minute when Jack Lambert led a breakaway and set up Jarrett Rivers whose close range shot was saved by Southport keeper Tony McMillan.

But Southport went up the other end and a cross came in from the left from Niall Watson for Jordan Archer to bullet a header into the top corner.

Quakers replied with a good move down the right, when Alex Purver found Kallum Griffiths and he made ground into the box to receive the return ball, but fired wide.

And another chance came when Rivers went down the right and pulled the ball back for Luke Charman to turn and fire over the top.

Quakers had a chance on 29 minutes when Griffiths found Jake Cooper in a good position in the box, but his pull back for Charman was cleared.

Southport created a chance on 35 minutes when Woods raced down the right, but his ball for Archer was behind him and the striker flicked the ball over the top.

The heavy rain was having an effect on the pitch, with standing water in the Southport penalty area.

In the second half, Southport tried to slow the game down, but they nearly added a second with a shot by Archer that took a deflection and looped over Taylor on to the top of the crossbar.

Charman showed great control inside the Southport penalty area to bring a Ben Hedley ball down, but his pass was just behind Hatfield.

And in Southport’s next attack, Connor Woods hit a 25 yarder that also smacked off the bar.

At the other end, Lawlor had a header blocked from a corner as the game swung from end to end.

Quakers levelled on 61 minutes with a superb goal. Luke Charman controlled a through ball, ran at the defence, and hit a low left foot shot into the bottom right hand corner for his ninth goal of the season.

Quakers nearly took the lead on 68 minutes when Hatfield found sub Kevin Dos Santos on the left and he pulled the ball back for Lambert to slide wide.

And then Dos Santos, who had come on for Griffiths, tried a 25 yarder which swirled just wide.

Southport sent on Marcus Carver as sub, and he managed to slip through, but Taylor saved at his feet with Danny Ellis stopping the follow up.

It was end to end stuff now, it was obvious neither side fancied penalties.

Quakers then had a chance from a free kick that fell to Charman outside the box, but his effort just cleared the bar.

Hatfield then made a good run from midfield and found Junior Mondal on the right, and he returned the ball for Hatfield to hit a curling right foot shot that the keeper saved.

Southport nearly won it in the last minute when Munro’s shot was parried by Taylor, and the ball rebounded off Newell wide.

Then in stoppage time, Mondal found Dos Santos and he stepped inside and curled a right foot shot inches wide.

Full time 1-1 and into penalties.

Southport scored all five of theirs, with McMillan saving the second Darlington penalty from Hedley and making the difference. Will Hatfield, Jack Lambert, Kevin Dos Santos and Luke Charman scored for Quakers.