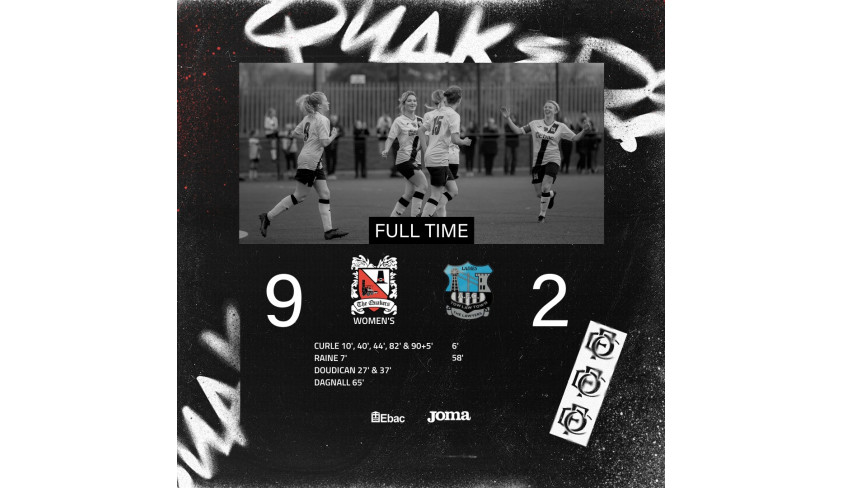 Darlington Women are still unbeaten in the league this season after a convincing 9-2 win over Tow Law on Sunday.

Sophie Curle scored five to give her a very formidable 27 in the league this season, and she helped to fire Quakers up to second in the table, twelve points behind leaders Hartlepool Pools Youth with three games in hand.

Manager Shaun MacKenzie said; “We started a little bit slowly, but we reacted really well after Tow Law went an early goal up, and we were 6-1 up at half time.

“There was some good football played, with some good finishes and some great teamwork.

“Our forwards were quite clinical, and if it wasn’t for the Tow Law keeper having a very good game, then we would have scored more.

“It was a good pleasing performance, and we’ve got plenty to build on. We’re all very pleased that we’ve gone ten unbeaten and we want to keep that record going.”

Darlington were back in league action returning to Eastbourne to play Tow Law Ladies.

The game began with disappointment as another slow start allowed Tow Law to get ahead after 6 minutes when the ball was lost out wide allowing the Tow Law attack to use their strength to get to the line to then play the ball to the centre of the box and it was finished well with the shot kept low to the centre of the net.

Thankfully, this awoke Darlington and just a minute later, the ball was played through the centre by Aimee Dagnall to Hattie Raine who used her pace to meet the ball first and take it around the keeper before placing it into the empty net for the equaliser.

On 8 minutes Darlington were ahead, this time the ball was played over the top by Millie Garnett through to Sophie Curle who again outpaced the defence to meet the ball first for a 1 on 1 with the keeper and she poked the ball home to make it 2-1.

Darlington were now dominating more and creating chances but Tow Law had another chance after 25 minutes breaking down the right and it needed intervention from Natalie Peart to keep them at bay.

It was 3-1 to Darlington after 27 minutes when the ball made its way to Curle on the right. She managed to evade a sliding tackle to get the ball into the box with Emma Doudican getting to the ball first and getting a cute finish with the outside of the foot.

Darlington continued to press and got their reward when on 37 minutes, the ball was played wide to Raine who fired the ball across the box and again Doudican was there to put the ball away to grab a brace.

It was 5-1 three minutes later when Toni Upton played the ball to Curle who drove inside from the left and struck across goal into the inside of the side netting. Darlington added one more prior to the break with the assist this time coming from Doudican playing the ball to Curle who struck with her left this time and the ball went in off the post, another hat-trick in the Darlington shirt for clinical Curle.

After the break Tow Law came out battling and not giving up on the game. After 56 minutes a serious injury to a Tow Law player meant a long delay in the game. Upon the restart, Tow Law had a corner, there was a melee in the box in which the ball could not be cleared and Tow Law got the decisive kick to get them a goal back, 6-2.

Darlington settled back down again and got their next chance when the ball fell to the feet of Katie Sheridan who fired just over from 20 yards. Darlington won a corner and on 65 minutes a delightful ball to the back post by Raine was thundered home by the head of Aimee Dagnall.

The eighth for Darlington came after 69 minutes after some good build up play by Emma Carter who fed the ball to Doudican who set the ball for Curle on the edge of the box to strike well into the bottom corner.

With a much changed defence and some substitutions, the back four of Gabi Paduriaru, Alice Wearmouth, Sarah Frew and Caisey Lee kept chances limited and the game became a disciplined affair.

The final chance of the game came when the ball reached the feet of Curle in the box who was taken down for a foul. She got up and does what she does best in putting the ball in the back of the net to make it 9-2 and grab her 5th goal of the game. That’s now 27 in 10 games in the league for Darlington’s number 15. Outstanding numbers.

Despite a number of injuries, Tow Law must be credited for a battling performance. Today’s player of the match went to Lily Large who started the game in only her second appearance since stepping up to senior women’s level having just turned 16, she showed maturity and a willingness to keep battling for the ball whilst distributing well. With a number of players getting vital minutes there will be strong competition for places to hopefully keep pushing the team forward to getting the results they need to carry on pushing up the league. Today’s win sees Darlington move one place up in the table from 3rd to 2nd with a couple of games in hand over the leaders. Next Sunday Quakers have a tough away game at Stockton Town.

Player of the Match: Lily Large