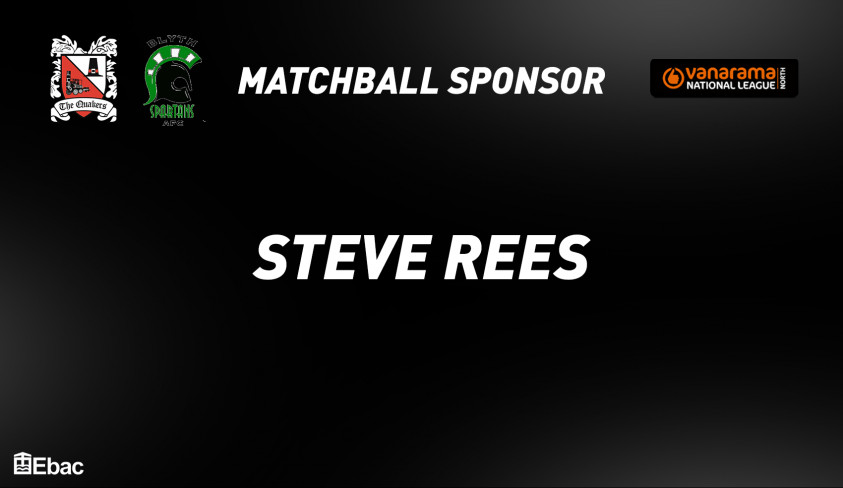 Sponsor of the Blyth Spartans game

We would like to thank Steve Rees for being the virtual matchball sponsor of Monday's home game against Blyth.

Steve, a lifelong Darlington fan, said; "My first Darlo match was the FA Cup tie against non-League Gateshead during which a wee Scot named Bobby Mitchell ran rings around our defence. A 1 – 4 home defeat (soon grew accustomed to those!) was disappointing, but the comforting aroma of pipe smoke and liniment as well as the Feethams roar made sure I was bitten by the Quaker bug.

"My all-time favourite player has to be Alan Sproates, a creative and elegant midfielder who served us loyally during the 60s and early 70s. In the current squad Will Hatfield is the driving force of the team.

"Since 2012 I have enjoyed being a part our fan-run club, even if it has proved a bit of a challenge on occasions. I am pleased to have done some volunteer work for the club on a few fronts. I have provided the Half-time Quiz for the matchday programme for the last twelve seasons, have been the coordinator for the Boost the Budget rewards scheme since it began, as well as being involved with the organisation of the seats for our season ticket holders at both Bishop Auckland and Blackwell Meadows. It’s been a labour of love really! ”

Steve also supports the club in many other ways.

Do you want to be a virtual match sponsor or matchball sponsor? Check this below

As the Club has been instructed to play all home games behind closed doors for the foreseeable future, we want to give our loyal fans and local businesses the opportunity to continue to support the club and still be a vital part of our match days. We are launching our Virtual Match Sponsorship initiative, which will be available for all home games until we are allowed to bring back spectators to matches.

Playing behind closed doors means that we cannot admit match sponsors to our games, and the Virtual Match Sponsorship packages are a perfect opportunity for businesses or local community groups to continue to get some valuable exposure. Not only is it great for businesses, it is also a perfect idea for individuals or family groups who usually go to our games or who want to celebrate a special occasion or perhaps to cheer up someone special in their life. We know how hard having to play behind closed doors is for our fantastic and loyal fanbase and hopefully by maintaining a personal connection to the football club we can all pull through together during these unprecedented times, as we always have done.

For every home game, we are offering the chance to virtually sponsor the match or the match ball.

The Virtual Match Sponsorship packages will be offered on a first come, first served basis and by taking part and buying these packages you will also generate a very important and regular revenue stream for the Club during these most difficult and uncertain times.

To find out more or to book a Virtual Match Sponsorship package contact the Club by email at commercial@darlingtonfc.org