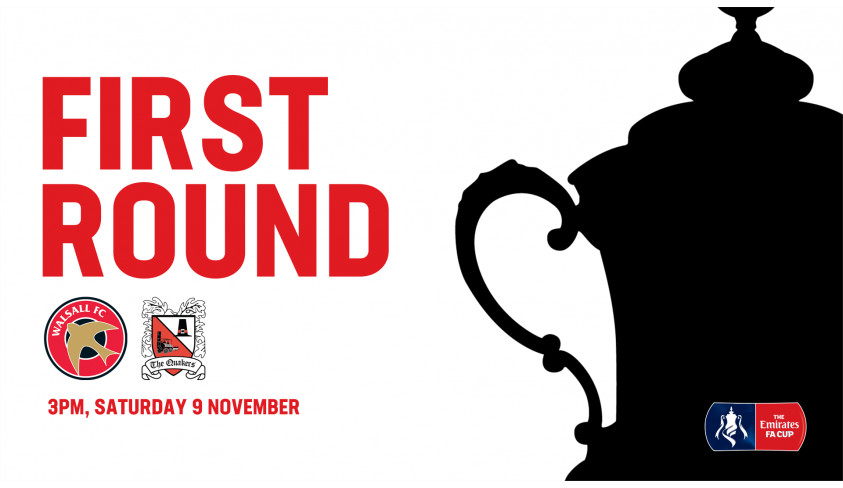 Joe brings the house down!

Darlington’s never-say-die spirit deservedly earned them a replay against League Two Walsall with an equaliser six minutes into stoppage time.

After taking a first half lead, Quakers conceded twice in three second half minutes, and Walsall looked as if they’d booked their place in Monday’s second round draw.

But in the sixth minute of stoppage time, Joe Wheatley scored from an Osagi Bascome free kick to send the 1200 strong Darlington army wild.

There were scenes of absolute pandemonium when the ball hit the back of the net and again on the final whistle. What a finish to a pulsating match that looked to have slipped beyond Quakers when Walsall scored twice in as many minutes! There were great scenes of celebration from the 1,229 travelling army as they applauded the team at the end.

Quakers started the game really well and settled into their stride straight away.

Walsall looked very anxious, and Quakers took early control of the game.  They created a chance after 10 minutes when Jarrett Rivers set up Ben Hedley, who fired over the top, and then soon after Jarrett Rivers cut in from the right and found Omar Holness, whose shot was palmed up in the air by Walsall keeper Jack Rose and held at the second attempt.

Quakers sent their travelling army wild on 17 minutes. Campbell and Hatfield played the ball up the left into the box for Stephen Thompson to pull across the box for Omar Holness to have a shot blocked, it fall for Rivers whose shot was also parried but only as far as Holness, who fired right footed across the keeper into the bottom left hand corner of the net.

It was nearly 2-0 on 21 minutes when Thompson spotted Ros off his line and tried to chip him from 35 yards, but the keeper just managed to save.

Walsall then made two subs to inject some life into their team, and one of those, Wes McDonald, made an impact with his pace. He raced into the box from the left into the six-yard box where Connell saved, and Rory Gaffney’s follow up was saved.

But McDonald nearly scored just on half time when he picked the ball up on the left, turned, and hit a right foot shot that struck the bar and the ball fell for Gaffney, who somehow pulled the ball wide from just eight yards.

Quakers nearly went further ahead at the start of the second half, when Stephen Thompson cut in from the left and pulled the ball back for Rivers whose flick was stopped by Jack Rose on the line.

And in Quakers’ next attack, Wheatley moved forward and struck a right foot shot that Rose somehow managed to push on to the bar.

Thompson then had a great run and shot that was blocked on the six-yard line.

There was a controversial moment on 70 minutes when man of the match Will Hatfield won possession midway inside the Walsall half and was pulled down by Dan Scarr, who was only shown a yellow.

Walsall always caused a problem on the break with MacDonald around, and Elijah Adebayo missed a good chance from ten yards after MacDonald set him up.

Walsall’s chances seemed to have gone when Scarr was shown his second yellow for fouling Rivers on the halfway line, but they levelled on 85 minutes when Darlington keeper Liam Connell could only parry a low shot by Liam Kinsella, and Coalan Lavery tapped in.

Two minutes later, Quakers were behind when Connell could only help an inswinging corner by Alfie Bates into his own net, and before the game could restart, Darlington full back Ben Hedley was shown his second yellow for an incident.

But Quakers kept battling away, and in the sixth minute of stoppage time, with the remaining 19 players in the Walsall box (including Liam Connell), Osagi Bascome struck a low free kick across the penalty area, and even though Donawa couldn’t get a touch, Wheatley came in at the far post to knock the ball home and send the 1229 travelling fans absolutely crazy.

Pandemonium! A great goal to finish the game after an emotional roller coaster over the last ten minutes.

The replay is on Wednesday 20th November at Blackwell Meadows -- and cross fingers for a TV game!

Here's what manager Alun Armstrong had to say after the game