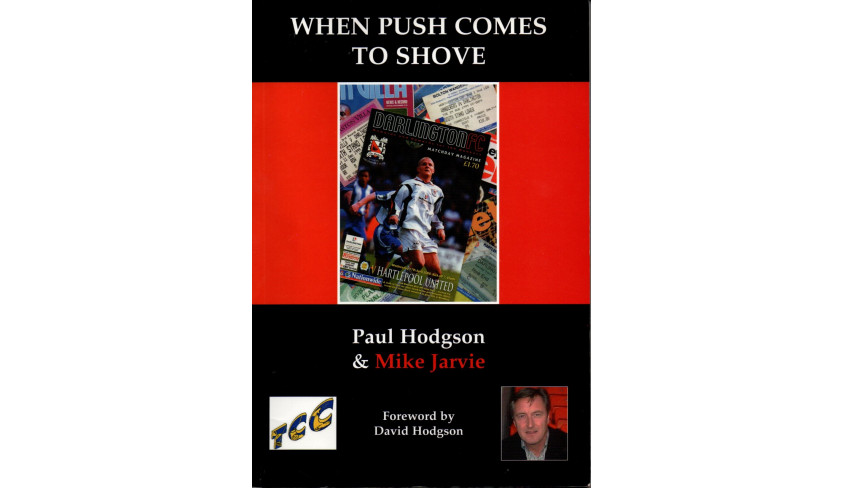 Thanks to Paul Hodgson, we're serialising his book "When Push comes to Shove" on the official website.

Today's it's the chapter covering July 1999 -- remember that the book was written nearly 20 years ago before certain events unfolded.

Since George Reynolds had assumed control of the club, we witnessed further activity in the transfer market during the close season that saw manager David Hodgson bring in players of real quality at this level.  They included veteran centre-half Neil Aspin (formerly of Leeds United and Port Vale), midfielder Martin Gray (ex-Sunderland and Oxford United), Welsh International centre-forward Lee Nogan (Grimsby Town) and pacy winger Neil Heaney (Manchester City). Not surprisingly, this time around the bookies had made us 5-1 to win the title.

For the pre-season friendly against Durham City at New Ferens Park, Mike and I met up in the Dalesman after we had both finished work. I was still wearing my shirt from work which I had augmented with a black and white striped Darlo tie.

After a swift pint, Mike pushed me the short distance to the railway station. When we bought our tickets using my disabled person’s railcard, I cheekily demanded a fifty percent reduction because the distance from Darlington to Durham was less than fifty miles. I explained that I’d read about this somewhere, though when the station official showed me the rulebook for railcards I backed down. I was clearly in the wrong. There was no such rule at all – there might have been a year before but not any more.

Never letting the truth get in the way of an opportunity to beat the system, I insisted on the same reduction a few weeks later when Mike and I went to Redcar and made the guard look a fool.

As soon as we arrived in Durham Stephen Lowson met us on the platform. Relieving Mike of his duties as chief pusher, Stephen wheeled me down the steep bank towards the city, telling us all about his visit to the Cathedral and the Castle earlier that day with his girlfriend Nadine.

Stephen said that he had preferred his trip around Durham to his experience of Lincoln Cathedral where they badgered you for money all the time. Not that he had been stingy – far from it. In fact, he had given a couple of quid at Durham towards the cathedral’s restoration fund. But what irritated him was that you had to pay more if you wanted to see the other sights in the Cathedral such as St Cuthbert’s tomb. If he’d known this in advance then he would have given less money and reserved some more to see other parts of the building, which seemed a fair point to me.

We crossed the busy street and went down North Road where we met Nadine sitting on a bench outside Yates’ Wine Lodge. Since fate seemed to have intervened in dictating our choice of watering hole, we decided to go for a meal in there.

As Mike stood at the bar, a young girl, her face plastered with makeup, took his order for food. The girl with the mask-like makeup actually took Stephen and Nadine’s plates to the wrong table. Now if she’d paid more attention to her job rather than tending to her face maybe things might have been different!

After the meal, Mike walked to a nearby cashpoint and on his return Nadine went to the cinema to see The Mummy and The Phantom Menace since she wasn’t interested in foot-ball.

We next went to the Fighting Cocks. But when we left it was bucketing down with rain. We wanted to cross Framwellgate Bridge but had to shelter in a doorway instead. I was drenched as I was only wearing a shirt. It rained incessantly.

Unable to wait any longer, we decided to run for it. Stephen pushed me over the bridge and we huddled in a doorway near Pizza Hut, waiting for the rain to ease off but it didn’t. The rain just got heavier. The drainpipes were spewing water by now like a tropical monsoon.

We made a dash up Silver Street, hogging the side of the buildings and running into shop doorways for shelter. Eventually, we reached the Market Tavern. Stephen asked for a taxi firm number from the barmaid and then went outside to the public callbox to book a cab.

In the Market Tavern we saw a busker with his guitar now safely stowed away in its case. He’d been well and truly rained off by now and was supping a hard-earned pint.

The taxi arrived and Stephen helped to get me inside and we made the short journey to New Ferens Park in Belmont, which is just on the outskirts of the city. On leaving the cab, we made an arrangement with the driver to collect us after the game.

Altogether, there were about two hundred Darlo fans inside the ground. New Ferens Park is a tidy little stadium; however, you really need a car or a taxi to get there if, like me, you’re disabled.

The three of us each paid our £3 admission. There was a disabled area of sorts – it had some panes of double glazing that provided a kind of rudimentary shelter against the elements, though we were warned not to lean against it! But, at least it kept the rain off.

This pre-season friendly proved to be a carbon copy of last year’s encounter against Billingham Town, which we won by an identical margin of 6-0. Our goalscorers this time were Lee Nogan, Neil Heaney, Steve Tutill, Marco Gabbiadini and Peter Duffield (2). The latter even missed a penalty.

After the final whistle, we waited for a few minutes in the bar of the social club. Not long afterwards the taxi arrived. The driver dropped us off in the market place and we went to the Hogshead in Saddler Street for a drink, but had to be wary as workmen were digging up the road. Disappointingly, the student-orientated Hogshead had no Budweiser so Mike and I opted for bottled Stella instead. Stephen, though, had some real ale, since according to him the pub was mentioned in the CAMRA guide.

While Stephen savoured one of the pub’s real ales, I recalled an episode from some four years ago, much to everyone’s amusement. Steve Keeney had persuaded me to go to a beer festival in Darlington’s Arts’ Centre. My philistine attitude remained unshaken – there I was, surrounded by various oddly-named brews, insisting on buying a pint of fizzy lager instead! Somehow, I don’t think my intransigence went down too well with the aficionados – unlike the lager that is, which went down a treat!

Anyway, the two of us emerged rather the worse for drink and in need of a cab. However, as we waited outside in the pouring rain, every time that a taxi appeared someone else jumped into it. When Steve rang the taxi firm to enquire as to the whereabouts of the cab they insisted that it had been despatched. We must have booked half a dozen, and waited in the pouring rain for at least an hour, until we eventually managed to get one home. Needless to say, my real ale experience left a bitter taste in my mouth!

As time was pressing on, Stephen left us briefly to meet up with Nadine. Mike and I therefore went to the Fighting Cocks for another bottle of Bud, where they later joined us for a quick drink before heading up to the station. Anxiously checking his watch, Mike told me that there was not enough time but of course I insisted that there was. He stressed that if we missed the last train I’d have to pay for a taxi to Darlington. “Just go with the flow” was my stock response. As the reader will discover, this is a phrase that I use rather a lot!

After a hectic sprint up the bank to the station, with Mike puffing and blowing behind me, we only just managed to catch the last train with five minutes or so to spare. Since he had to be up for work at five o’clock the next morning, he wasn’t very appreciative of my point of view!