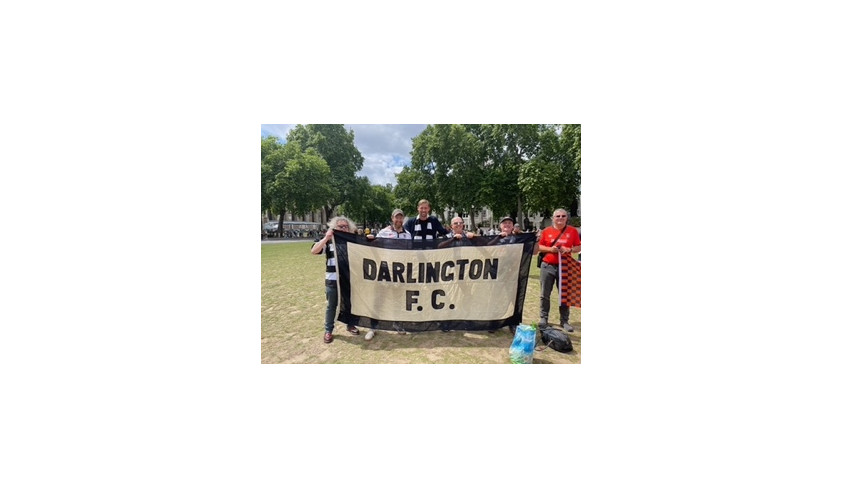 Save Our Beautiful Game

Four Darlington fans recently took part in march with Peter Crouch and a programme called Save our Beautiful Game.

On Friday 10th June Chris Walton, Ted Blair, Simon Hawkins and club chaplain John Barker represented all Darlo fans at a gathering in central London where we joined supporters from a number of clubs at the invitation of Peter Crouch. Discovery+ were filming material for an upcoming programme in Peter’s series entitled Save our Beautiful Game. We marched across Westminster Bridge and then gathered across the road from Parliament. We were able to display Chris’s Darlo banner, including getting a photo with Peter joining us and holding it. He made us all look like midgets! We were also able to explain what had happened to us over the years and share our thoughts and what changes might help to prevent this happening in the future.

Most, although not all, all of the clubs were from the London area, so it was great to get our thoughts across. We most certainly did that, let’s see what if anything is included in the final version of the programme. Chris excelled as the counter voice shouting “Now” every time we concluded our marching chant, let’s hope it is included in the final cut. Everything came to an end at 1pm and the plan was for Peter to say some closing words. Unfortunately, the bell ringers of St Margaret’s started a peal exactly at 1pm. We waited for a while until John (using his churchy experience) pointed out to the producer that the peal was likely to last for 45 minutes. So, the last bit recorded was Peter trying to make himself heard over the sound of the bells! He thought it was loud, it was nothing compared to the Tin Shed in full voice!