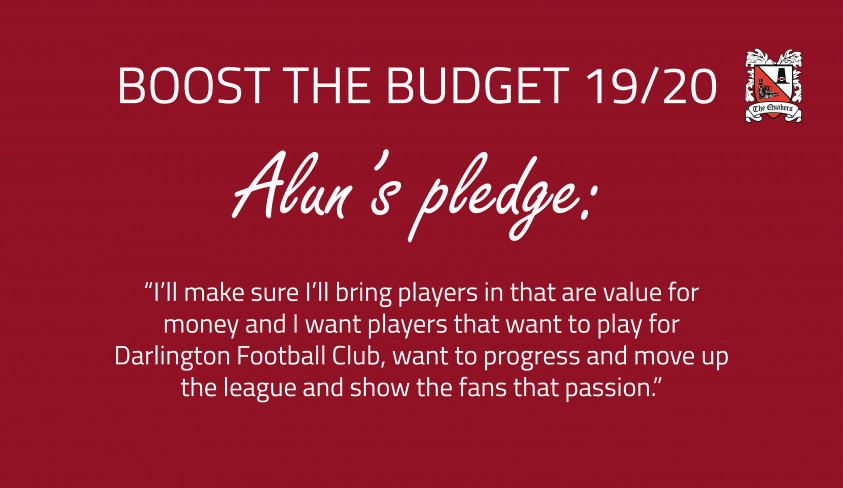 Our initial Boost The Budget target has now been reached – but please keep the pledges coming to beat another target!

Our amazing fans and owners once again demonstrated their loyalty and commitment by hitting the initial £80,000 target for Boost The Budget with 6 days to spare – but why stop there? Now we want to beat last season’s figure of £85,008!

New manager Alun Armstrong has his eyes on several transfer targets, and the more that is raised to help him with Boost the Budget, then the better, whilst also allowing the directors to build the club off the field as well.

Chief Executive Officer David Johnston says that he is “flabbergasted” by the achievement, and said; “The generosity and loyalty of Darlington fans never cease to amaze me. To reach £80,000 within weeks says so much of them.

“There is no need to stop at £80,000, fans are quite welcome to continue pledging towards the budget. It all helps Alun to build a team that is able to compete well with other clubs in this division.”

Chris Stockdale, Chair of DFCSG, the owners of Darlington FC said; “It’s a fantastic achievement to hit our initial target well ahead of the deadline. This funding from our fans and owners is crucial in helping build our great club on and off the field. We’d now love to exceed last season’s total of £85,008 and see just how much more we can have pledged by the end of May.”

Boost The Budget will close at midnight on May 31st. To pledge – click here.