Quakers granted permission to play at the Northern Echo Arena 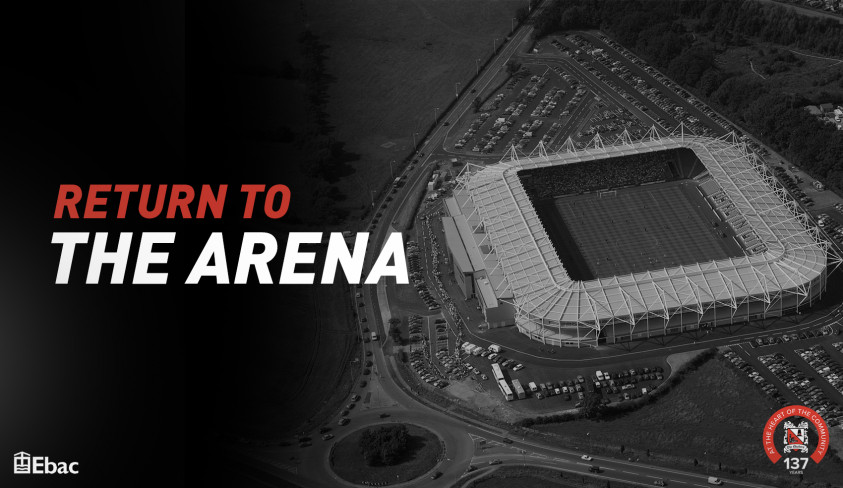 Darlington Football Club has been granted permission by the Vanarama National League to temporarily play league games at the Northern Echo Arena for safety reasons.

The league informed the club of its decision following a League Board meeting, but the move is subject to a satisfactory ground inspection by the league and the granting of a safety certificate by Darlington Borough Council. These matters are currently in hand.

The club has played at Blackwell Meadows a mile away since December 2016, but the capacity of the ground has been greatly reduced to around 600 for the foreseeable future because of social distancing under Covid restrictions, and that revised capacity would be insufficient to cater for 650 season ticket holders and an average crowd of 1458 fans.

Darlington chief executive officer David Johnston said; “We are grateful to the league for swiftly granting us permission, and we will now prepare for the ground inspection on Wednesday.

“I would like to thank all those who have worked extremely hard together to bring this about. There has been a huge team effort over the last three weeks ever since we calculated that Blackwell Meadows would be unsafe and inadequate for our needs.

“We are now focusing on the forthcoming visit by the league’s ground inspector, and hopefully there won’t be any major issues.

“We have been in talks with Darlington Mowden Park Rugby Club regarding the arrangements, and we hope to announce more details in due course.”

Darlington Mowden Park chairman Mick Birch commented: “We’re delighted to be able to assist our neighbours Darlington Football Club at such a difficult time for so many sports clubs. The current restrictions placed on sporting attendances have placed added pressure on a lot of clubs, and we’re pleased to be able to invite DFC and their supporters to the Arena."

The National League North season is due to start in week commencing 5th October, while the club might be given a home tie in the FA Cup second qualifying round on Saturday 3rd October.

The club has been working very hard behind the scenes since permission was requested to move, and it is grateful to its own staff and volunteers, Darlington Mowden Park Rugby Club, Darlington Borough Council, Darlington Rugby Club, Peter Gibson MP for Darlington and other bodies and people for their efforts.

The club previously played at the Arena from 2003 until 2012 when it became fan-owned after it was placed into administration by its previous owner, and for financial reasons left for Bishop Auckland. After being forcibly relegated to step 5 of the national non-league system by the FA, the club has won three promotions, and the fans have raised over £1.5 million in eight years to finance the club and pay for infrastructure.