The Ramblings of Rev John -- Where were you when.... 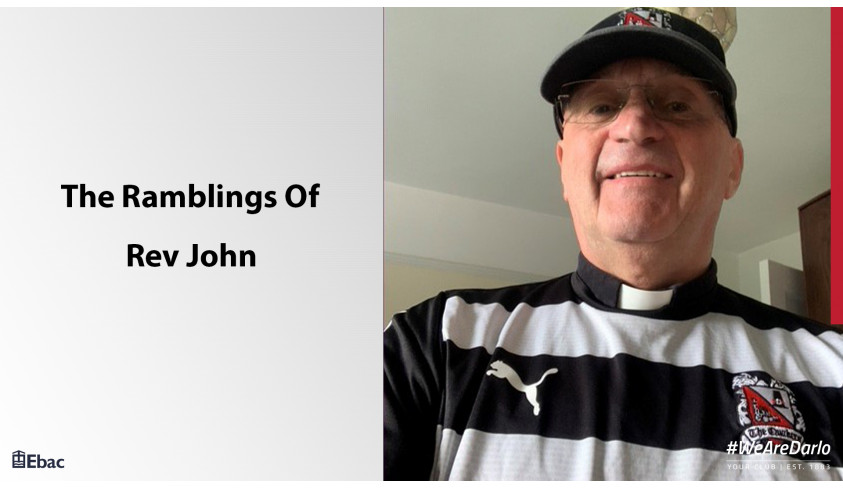 The latest from our chaplain

Traditionally, the standard “where were you” question related to the assassination of John F Kennedy. As the years pass, for more and more people the answer to that question would be “not born yet”. Having loved and supported Darlo over many years of living in weird and wonderful places one of the oddities that I tend to remember is where I have been when we played our very significant games.

So, for example, when we played Peterborough on that horribly wet Friday evening at Wembley in the play off final, I was watching in Kiev in an Irish bar. To my initial delight, just before the match started I was joined by a fellow Brit and I soon discovered he was also from Darlington. I also very soon discovered that he knew every combination of swear words in the English language plus some additional variations that were certainly new to me and as the match went from bad to worse I moved slowly further and further away from his chair in case his verbal ranting turned more physical!

When we played Man City at Feethams in the FA Cup, I was leading a study tour from Latvia and was able to watch the match in an Edinburgh bar. Just before the match started the Sky cameras focused in on the East Stand and I felt really nostalgic seeing people I knew well watching in person as I watched from afar. I will never forget the Gary Bennett header that put us in the lead and the considered opinion at half time among the neutral Scots in the bar was that we would coast the second half. Sadly, I knew Darlo better and of course we let in an equaliser before the end.

The Walsall replay last year? We were on holiday in Tenerife and I was able to watch in a packed bar where everybody apart from my wife and I were there for a golf society awards evening! At half time a guy came over and noticed my Darlo shirt, his first word was “respect”. He knew our story, and since 2012 had followed our progress. I felt really proud to be able to tell him more about how we not only support but fund our club.

Now, let’s look forward. Where will we be when we play our first home match of the 2020-2021 season? Well, it seems like we will be back at the Arena and what a debate that has aroused. Probably because I have spent so much of my life in places where it has been physically impossible to see Darlo matches in person I take a much more sanguine view. I would love to see Darlo play anywhere, even on the hallowed cow pastures of Longpasture Farm!

Let’s be thankful, if we manage to start the season, that we are able to watch our team anywhere. The Arena is just a stadium at the end of day. I know it’s a cold brute and it holds many bad memories but the past is the past. Darlo is my team and I will watch them in any way that I am able anywhere that they play. So, if anybody asks you where you were when Darlo played their first home match of the 2020-2021 season, I hope that you will answer, “at the Arena of course, where were you?

Finally, a reminder that if for any reason you are finding life a bit hard to handle at the moment and you would like to chat, please don’t hesitate to send a message to me at  chaplain@darlingtonfc.org