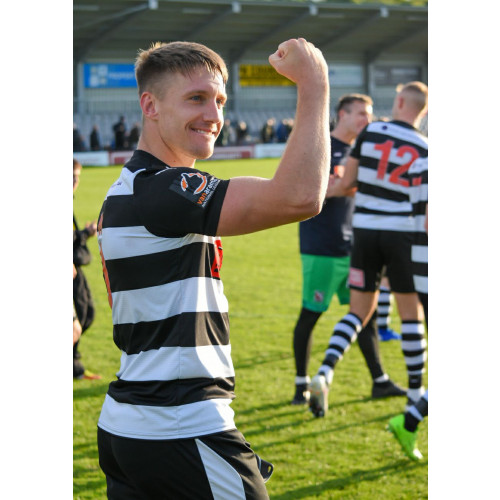 Terry joined Darlington in November 2012 from Dunston UTS where he was part of their 2012 FA Vase winning side, and is the second-longest serving player in the Darlington squad.

Capable of playing left-back, left wing and central midfield, he scored one of the most important goals in Darlington’s recent history when he scored the equaliser in the top of the table clash at Spennymoor in January 2013. Quakers went on to win the game 3-1 and take control at the top of the Northern League table and win the title.

He has now won three promotion medals with Darlington, having added EvoStik First Division North play off winners and EvoStik Premier Division title winners. He scored 11 goals in 2015-16, and another 12 in 2016-17 taking his tally for the club past the half century  – not a bad return for a player who has made most of his Darlington appearances at left back.

Terry was made skipper on the side during the 2018-19 season, when he played in the centre of defence.

He celebrated his 250th league start in the 0-0 draw with Hereford in November 2019.